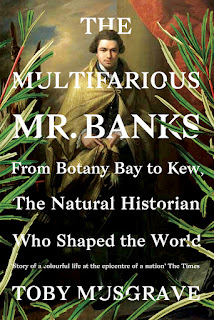 A new book has just been published which claims to restore Sir Joseph Banks "to his proper place in history as a leading scientific figure of the English Enlightenment".

'The Multifarious Mr Banks: From Botany Bay to Kew, The Natural Historian Who Shaped the World' is written by Dr Toby Musgrave and was published in April by Yale University Press. The book is 386 pages long and boasts 48 colour illustrations.

A review of 'The Multifarious Mr Banks' will appear in the next issue of BSBI News, our membership newsletter, but meanwhile, here's a little more info from Yale University Press to whet your appetite:

"As official botanist on James Cook's first circumnavigation, the longest-serving president of the Royal Society, advisor to King George III, the "father of Australia," and the man who established Kew as the world's leading botanical garden, Sir Joseph Banks was integral to the English Enlightenment. Yet he has not received the recognition that his multifarious achievements deserve.


"In this engaging account, Toby Musgrave reveals the true extent of Banks’s contributions to science and Britain. From an early age Banks pursued his passion for natural history through study and extensive travel, most famously on the HMS Endeavour. He went on to become a pivotal figure in the advancement of British scientific, economic, and colonial interests. With his enquiring, enterprising mind and extensive network of correspondents, Bank’s reputation and influence were global. Drawing widely on Banks's writings, Musgrave sheds light on Banks’s profound impact on British science and empire in an age of rapid advancement."

If you are a BSBI member and you would like to order a copy of the book, you can claim a discount of 30% off the RRP of £25. To order your copy at the exclusive price of only £17.50, please go to the password-protected, members-only area of the BSBI website where you will find the code and details of how to claim your discount.

Not yet a BSBI member? Our subs page lists current membership rates and offers various ways to join us with just a couple of clicks of your mouse! It also has links to blogposts like this one listing all the benefits of BSBI membership - discounts on botany books is only one of the many perks of joining our society, whose numbers are growing by the day!