Report on the Inaugural Grassland Conservation Conference: Day One

Back in June, we featured a trailer for the forthcoming Grassland Conservation Conference, due to be held at Edge Hill University on 14th-15th August. Organiser Ashley Lyons is now back to tell us about the conference. Over to Ashley:

"The inaugural Grassland Conservation Conference took place at Edge Hill University earlier this month and was attended by a group of around 50 academics, conservation practitioners and farmers. Spread over two days, the conference provided an excellent forum for the discussion of research and practical conservation. The first day followed a traditional conference format with a series of talks, a poster session and an excellent conference meal. 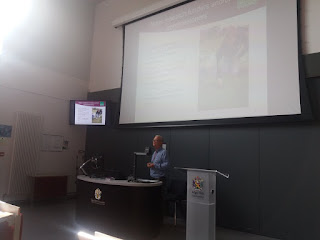 Richard Jefferson, Senior Grassland Specialist of Natural England (on left) opened proceedings with the Keynote talk ‘Evidence to advice: How researcher-practitioner partnerships can support successful grassland conservation’. Richard’s talk was particularly apt as the aim of the conference was to promote collaboration and dissemination of knowledge between researchers and practitioners.

This was followed by a varied and interesting range of talks which included talks on organisms associated with grasslands from three separate Kingdoms!

The first talk in the oral sessions came from the Wildlife Trust’s Mark Champion who discussed the development of grasslands on post-industrial sites, a very interesting talk that demonstrated the biodiversity value of sites not traditionally associated with nature. 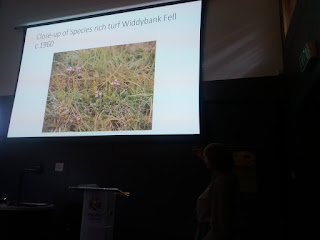 Next up was Carly Stevens of Lancaster University talking about their research into fifty years of vegetation change in the Sheffield region. Carly highlighted the negative impact that bracken has had on plant diversity in some places.

Edge Hill University’s Elizabeth Sullivan followed with her research into genetic diversity and connectivity in hay meadow vegetation, a subject of increasing importance to conservation in an increasingly fragmented landscape.

Carol Edmondson provided the first of several talks on grassland associated invertebrates with her work on responses of bumblebees to hay meadow restoration. If you restore a meadow bumblebees will follow.

Bill Grayson, the founder of the excellent Morecambe Bay Conservation Grazing Company provided a fascinating insight into grazing selectivity of cattle in a conservation grazing system. Bill discussed the nutrient content of the vegetation in the semi-natural grasslands his cattle graze, demonstrating that high botanical diversity is good for livestock health. 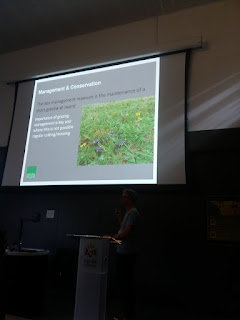 Bill’s talk was followed by several talks on grazing impacts in the uplands with Sam Turner examining bryophyte diversity under cattle grazing and no grazing, Margaret Bradshaw (above right) discussing over grazing and under grazing effects on rare plants in upper Teesdale, and yours truly (Ashley Lyons) examining spider community responses to contrasting grazing management in upland calcareous grasslands.

Rebecca Whitla continued the invertebrate theme with her work on genotypic variation in Marsh Fritillary butterflies before Natural England’s Sean Cooch (on left) introduced the third Kingdom of the day with his talk on the conservation status of England’s grassland fungi.

Martin Allen presented his captivating idea of introducing an ancient grassland inventory akin to the one used for ancient woodland. This talk stimulated much discussion, so watch this space for Martin’s inventory…

Stephen Peel then talked about the 98% of grassland in the UK which is not designated in some way and asked how we can meet international biodiversity commitments by incorporating them.

The talks were rounded off by Edge Hill’s Paul Ashton (who also sits on BSBI's Training & Education Committee); Paul explored the development of grasslands, their current status and asked what the pressing questions about grasslands are going into the future.

Next up was the George Stapledon Poster Session which was very generously sponsored by the Sir George Stapledon Memorial Trust with a grant and poster prize. The session featured 12 posters on a range of grassland related topics. The best poster prize was won by Melanie Stone for her excellent poster titled ‘Investigating community change on limestone grassland under different rainfall regimes’.

The first day of the conference was rounded off with an excellent conference meal which featured generous servings of wine and an epic cheese board!"


If you would like further information about the Grassland Conservation Conference please visit https://www.edgehill.ac.uk/biology/grassland-conservation-workshop/

Many thanks to Ashley for this report - she'll be back next week to tell us about the field trips from Day Two of the conference.
Posted by Louise Marsh, BSBI at 23:58