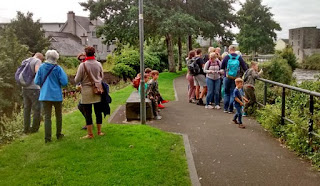 Last month we heard from Phoebe O'Brien about the urban wild flower walk she was planning to lead in Galway on 26th August.

Participants such as writer and "lapsed biologist" Stan Carey took to Twitter over the weekend to report on how much they enjoyed the #bsbigalwaywalk. Stan's tweet is copied below and he also shared the photo on the right:

"Exploring Galway's native flora between the canal and the river. Thanks to @BSBIbotany for a fine walk & talk. #HeritageWeek"

I asked Phoebe to tell us a bit more about how the day went:

"The BSBI Galway Walk was my first time leading an event for BSBI, and it was also the first ever Heritage Week BSBI event. I need to thank Maria Long and Louise Marsh for their mentoring through the grant application and event management, and Eugene and Ciaran for taking the heat and splitting the participants up between us.

"I think we ended up with more than 25 explorers, including three generations in one family. It was quite a big group on the narrow path between the canal and the River Corrib. Ciaran managed to make records of 80 plants, including some water weeds which he fished out to the delight of the children, who then had to have a go too.

"We also need to thank Carroll's pub on Dominick Street for letting us use the beer garden, where we looked through the contents of my home made vasculum which some of the children had filled with plants they had found. This gave us a chance to do some revision and briefly open the floras.

"The mixture of ages, languages and abilities really made it a really interesting group. I learned much from them too.

"As a follow up I've written a five page PDF covering 20 Common Urban Plants, a selection of the plants which we saw on the day. The PDF can be downloaded here.

"I really think it was worth it to bring BSBI’s work to a wider audience and I hope that we can create more beginner events like this and work with the Heritage Council again in the future".


“I had the great pleasure of taking part in the walk and was really impressed by the variety of plants that we came across. The keen eyes of the guides helped me to see things that I had never properly noticed before. Indeed, I was particularly impressed by their knowledge of the aquatic plants as this a particularly hard group to master.

"Species spotted included natives such as charophytes and pondweeds, and invasives including what may be Nuttal's Water Weed". (LM: I understand that Phoebe has sent this plant to one of the BSBI expert plant referees for confirmation].

"Botanising in the urban environment, I have to say, revealed a rich diversity that has left me wanting to learn more!  Well done to all involved.”

Many thanks to Catherine and Stan for their feedback and for the photos, to Phoebe for leading such a successful walk and for sharing the pdf, and again, we are delighted to acknowledge funding from the Heritage Council for funding this event as part of Heritage Week 2017.