BSBI’s network of local recording groups continues to grow and some of them have a staggering amount of useful information on their webpages.

One of the most vibrant local groups is the Kent Botanical Recording Group. Since 2010, they have published an annual newsletter with accounts of field meetings, and they also publish ‘Kent Botany’, an annual report of botanical developments in the county, which lists notable plant records.

Their webpage also features site Floras, historic Floras, notes on conservation work carried out on rare species in the county, a photographic gallery and ID videos by resident ace photographer Lliam Rooney and sections of the Rare Plant Register as they become available. All these resources are available for any botanist to download free of charge. There is also a link to the Kent Botany Facebook group. 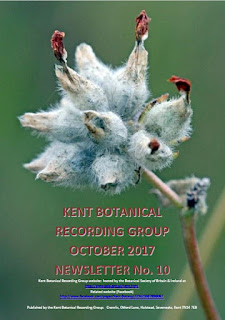 I asked County Recorder Geoffrey Kitchener how long he had been at the helm in Kent and what was the secret of the Kent Botanical Recording Group’s success.

Geoffrey said: “I've been Kent recorder since the end of 2009 (subsequently joined by Sue Buckingham as co-recorder for East Kent). In March 2010, I brought together 36 other botanists to form the Kent Botanical Recording Group. We now number 124 members, young and not-so, and there's been a lot of enthusiasm. I'm particularly pleased how many have developed considerable botanical skills as a result of joining in.

"By the beginning of 2017 we had gathered nearly 300,000 records since the group started; but it's not just about numbers - we have, I think, made significant advances in our knowledge of the Kent flora, moving on from the baseline established by Eric Philp's two Kent Atlases.

“I think it's important that those recording, or interested in it, can see, as soon as may be, the results of our meetings and recording. So, in addition to the newsletter giving reports of meetings, plant lists for each meeting are sent to all recording group members shortly afterwards; and all the special records for the year are featured in our annual report”.


The growing number of Kent botanists who post photographs of their plant finds on Twitter suggests that Geoffrey’s approach is proving highly effective. The story of one of these botanists, David Steere, is currently being serialised on these pages, with the first instalment creating huge interest on social media. David is living proof that if you are keen to improve your botanical skills, your local recording group can be just the support you need!

Head over here to find out about local groups in your area.
Posted by Louise Marsh, BSBI at 23:13