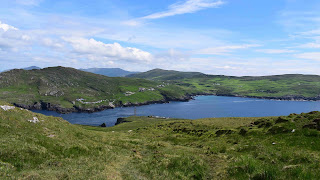 Botanist Jessica Hamilton, the driving force behind the BSBI Kerry group, recently spent some time in the field with Ireland's celebrated Rough Crew, the intrepid plant-hunters who scale mountains and tramp through bogs in pursuit of the wild flowers that nobody else can reach!

Over to Jessica to find out what happened in this account illustrated by Jessica's photos :

"A recent weekend was spent botanising on the magnificent Dursey Island with the BSBI Rough Crew. Over the course of the weekend in total there were eleven botanists, including myself, traversing the terrain of the island recording the botanical delights and soaking up the fabulous scenery. 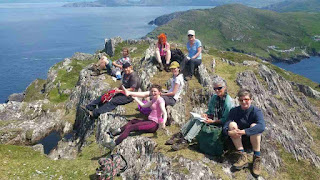 "All in all we recorded around 258 species including many of the little rarities and gems mentioned throughout this report. Overall a weekend of fantastic plants, great people, scenery, bugs, and the weather really played its part.

"However it wouldn’t be the Rough Crew if it didn’t include shoes falling apart, blisters and sheep poo, now would it? Intrigued? Read on to see what we got up to!

"The location, Dursey Island, is accessible by Ireland’s only cable car. Myself, Rory and co arrived on the Saturday morning where we met up with the others who had arrived the night before. After dropping our bags at the house we quickly went to find the other members who had already started their plant hunt for the day. They had already knocked off a nice few species off the list including the carnivorous Pinguicula vulgaris (common butterwort). 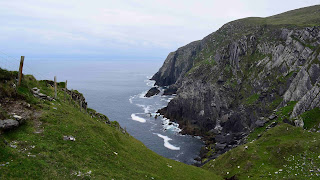 "Not long after eagle eyed Rory spotted Ophioglossum azoricum on a rather unsuspecting pathway. A species I hadn’t seen before yet (not surprised, it’s called the Small Adder’s tongue for a reason!)

"What’s better was that the finding of this plant was a brand new record for all of County Cork, so was a great species to have found. We moseyed on and walked the road alongside the cliffs which gave breath-taking views of the surrounding cliffs and headlands which were at times somewhat encompassed by the fog. 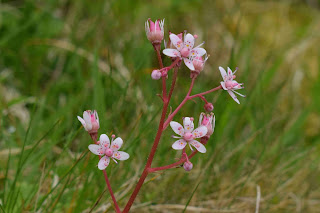 "As we traversed the road we kept finding lots of lovely species including Cerastium arvense (field mouse-ear). Wexford County Recorder Paul then pointed out another tiny little plant, Centuculus minimus (chaffweed) nestled below a mix of sedges/grasses on a damp part of the track.

"It was at this point that Cliona and I went on a not so brief tangent from the rest of the group, as a particularly nice gulley drew our attention. It was a very worthwhile detour as we reached a somewhat sheltered area and spotted lots of Green Hairstreak butterflies, (another new species for me!), as well as common blues flittering about the place. 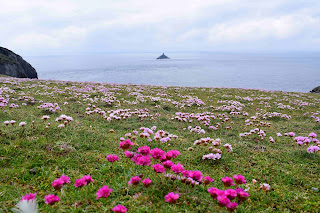 "Primroses, still in flower, were also aplenty and Saxifraga spathularis (St Patrick’s Cabbage, above left) was also growing happily in clumps as well as swathes of cotton grass growing alongside a backdrop of particularly striking cliff top views. Cliona had a rather impressive? blister on her foot and a ‘bottom’ of sea thrift provided a cushion on which to rest her weary foot for a moment.

"On our path back to re-joining the group we were actually rather taken aback by the sheer carpets of Thrift (on right). 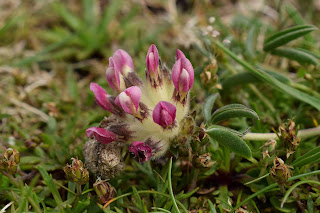 "We eventually met back up with the group and after a quick refuel we continued to ramble on and tick off lots of fantastic species including Viola canina (heath dog-violet), Radiola linoides (allseed), both species not all that often seen and it was great personally to see Anthyllis vulneraria (Kidney vetch) in one of its other colour forms (on left), compared to the usual yellow that is more typically seen.

"It was around this time as well that a rather large raptor was spotted by a few members of the group and what was originally presumed to be a common buzzard was later confirmed by West Cork County Recorder Clare to be a Honey Buzzard (Pernis apivorus).

"We continued on and after elevenses at the signal tower, we spotted a nice patch of  Ophioglossum azoricum, this time much happier than the earlier patch growing in the trackway. As small as the species is, once you recognise it and get your eye in quite a few individuals were seen. 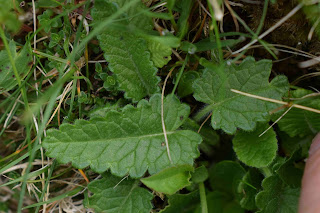 "We all made it back to the house in one piece for some well-earned food and drinks., although at this point my shoes were on their last legs (this was to be their penultimate outing!).

"The next morning we headed off early to use the day to its full potential and were on a mission to increase our number of coastal species and find in particular, one species - Betonica officinalis (betony, on right), which had been historically recorded there and we had a nice description of where to find it. 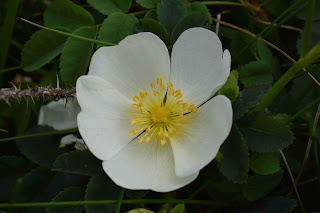 "Sure enough within moments of reaching the area where it had been once found before, it was spotted. In Ireland, Betony is a very scarce species with a mostly SW distribution and it is protected under the Flora Protection Order, so another great species to both see and record for the island. Although not in flower, as it’s a somewhat later flowering species, in the damp gulley where we found it the leaves were to be seen growing in quite a luxuriant state.

"On a nearby ledge Paul spotted Rosa spinosissima (burnet rose, above left) which was putting on a great show and always a nice species to see. 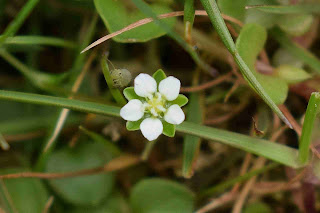 "We moseyed on and kept ticking off species both uncommon and more common including the less often see Sagina subulata (heath pearlwort, on right).


"Not long after, I lost the first sole of my shoes (but they was still functional - somewhat…one sole down- one to go!).

"While we were sitting on short coastal turf it was noticed that we were surrounded by more of the Ophioglossum azoricum, this time in quite a plentiful supply. 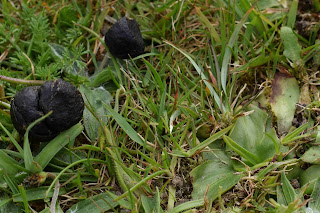 "After a quick focused hunt Paul also spotted the leaves of Spiranthes spiralis (Autumn Lady's-tresses). The photo (on left) includes sheep droppings for scale, showing just how small this plant is!

"Helpful Hint: If you haven’t got a ruler in the field and you have a small plant, sheep droppings are a great ‘scale’ to compare tiny plants against against.

"A few of us made an escape to another island nearby which is accessible when the tide is low and was well wort the brief scramble to get up there. While traversing the scenic spot we added a few more species to the list including more of the Cerastium arvense (field mouse-ear), Hedera  helix (ivy), and it was quite amazing to see some pure white versions of Armeria maritima (thrift). Another highlight for me were these fantastic Rose chafer beetles (Cetonia aurata) which were clumsily flying about the place. 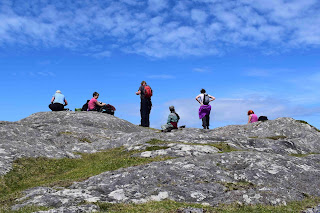 "We eventually left the smaller island and returned back to the main island to regroup with the rest of the gang. We realigned at the top and had a brief break while taking in the views, absolutely breath-taking! (Even though the views the day before were amazing, this day was much sunnier with clear skies, making for even more sensational scenery).

"We clambered on and a few of us descended slightly to see if we could spot any new species hiding from us. Moments into our search the sole of the second shoe fell off, leaving behind two sole-less shoes with laces that were still in great nit, I have to admit they were still very comfortable! 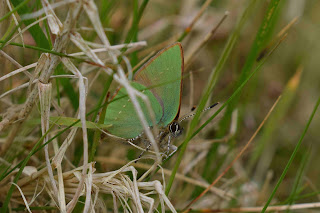 "Rory soon found a little cavern and nodded triumphantly to say he had found the gametophyte of the Killarney Fern (Trichomanes speciosum) - not the first time he's performed that particular trick! We moseyed on and aimed for a gully which had taken our eye earlier on in the day and would bring us back down near to ‘basecamp’.

"It was a lovely little spot and although the species list didn’t increase dramatically we were rewarded with more Green Hairstreaks (on left) and Green Tiger beetles!


"To reiterate the opening line of this report, a fantastic weekend was had by all, spent with a great bunch of people. Many thanks to Clare and Rory for organising such a great weekend. Until we meet again on the next island!"
Posted by Louise Marsh, BSBI at 23:58