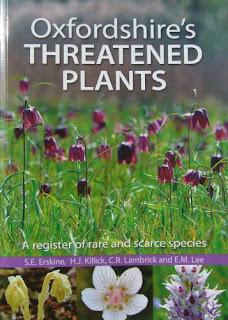 Today's guest blogpost is by David Morris, the County Recorder for Oxfordshire, about a rather important book launch he attended last month.


"This summer saw the publication of over ten years work on the Rare Plant Register for Oxfordshire, adding one more to the ever increasing collection of these invaluable documents.

"Published by Pisces Press, Oxfordshire’s Threatened Plants departs from some other county Rare Plant Registers in covering the modern administrative county, i.e. the vice county of Oxfordshire (VC 23), the Vale of White Horse (known locally as Occupied Berkshire, VC 22) and tiny areas of some other neighbouring vice counties.

"The book charts the fortunes of 274 studied species, around a third of the county’s natives.

"Based on records of nationally or locally rare and scarce species gathered up to around 2012 when field work for the project ended, the book describes the ravages of the twentieth century on our indigenous flora.

"While a small number of species studied are not doing so badly as first thought, most have fared rather less well, with more than fifty considered to have become extinct, around ten per decade between the 1970s and ‘90s.

"Oxfordshire’s Threatened Plants goes beyond a mere list of plants, however, providing some ecological analysis of the carnage.

"Unsurprisingly, the losses are concentrated among stress-tolerating species, such as many arable plants and those of low-nutrient habitats such as fens.

"Many also demand suitable grazing or other management, which it is increasingly difficult to provide except by dedicated volunteer work. These trends are lucidly described and illustrated in the book.


"All is not gloomy, however. Fortunately, a small number of the plants listed in the book as having lost out in modernity’s race to the bottom have been rediscovered in Oxon recently.

"These brilliant records, such as Potamogeton nodosus (Loddon pondweed), are described on my blog with much fanfare.

"The book also highlights the critical work of the Oxfordshire Flora Group and Wychwood Flora Group in staving off extinction of our most important and threatened plants, several of which grow almost nowhere else in these islands.

"As a final thought, if the efforts of Oxon’s plant conservationists come to nothing and in fifty years the situation in the county is even more dire, then at least there is now a colourful and boldly worded document out there in the public domain to say ‘we told you so and tried to do something about it’.

"Please buy a copy and support this work".

Many thanks to David for telling us about this new publication and about the threatened plants in his county. See also Threatened Plants in Britain and Ireland by Kevin Walker, Pete Stroh and Bob Ellis, published late last year and recently reprinted due to popular demand.
Posted by Louise Marsh, BSBI at 23:44