A magical afternoon and some historic water-lilies! 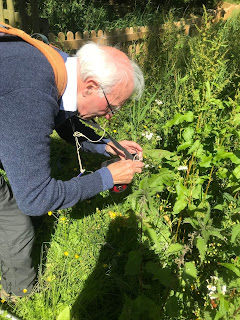 Back in springtime, I received an enquiry from a couple who had just moved into a historic house in the Scottish Borders and had been told by the previous owners that the grounds housed a rare orchid.

They didn't know what kind of orchid, or whereabouts in the grounds it might be, but they were keen to find out more and "preserve it if we can".

I was aware that eminent botanist Rod Corner, a BSBI member since 1967, knew the area well, so I passed the enquiry on to him.

Rod emailed back that the plant in question would be Bird's-nest orchid Neottia nidus-avis, recorded at the site in 1996 but not since, although it occurs still in nearby woodlands. 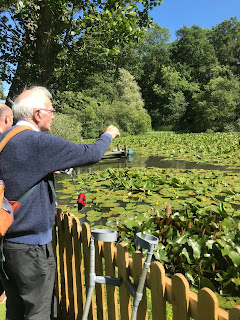 He also mentioned a record of Yellow Water-lily Nuphar lutea at the site, reputedly planted there by Sir Walter Scott and last recorded in 1876. Rod mentioned how exciting it would be to visit the site and try to refind the orchid.

The new owners were delighted with this response - they admitted that although they didn't know much about botany, they would love to find out more and were enjoying the wildlife that visited their new home (including badgers, goosanders, little grebes and a resident pair of moorhens) and yes, they did have water-lilies on the lochan and would forward photos as soon as they flowered.

A few weeks later, Rod received the photos, confirmed the presence of the yellow water-lilies and was cordially invited to visit the house when next he was in the Borders and to see what else he could find.

The new owners of the historic house emailed me in late summer with this message: 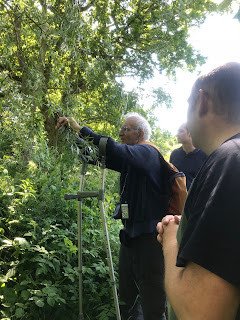 "We had a magical afternoon when Rod visited us. It was so lovely to spend time with someone so enthusiastic and knowledgeable about the flora here and in the Borders. The afternoon was warm and sunny which meant we could have tea and cake in the garden after a walk around the lochan.

"I have attached some photos I took during the visit. [Ed.: The photos show Rod examining and photographing a mystery Primula, the famous yellow water-lillies and a mystery willow.]

The new owners continued: "Rod is going to put us in touch with Luke Gaskell [Ed.: Luke is the BSBI County Recorder for the area] which means we will be able to continue our relationship with the BSBI which I am very excited about. Thanks again for all your help. We didn't find the bird's-nest orchid but we will continue to search..."

Refinding rare orchids is, of course, a great pleasure but magical summer afternoons with knowledgeable botanists are, I would argue, just as delightful.

Many thanks to the new owners for sharing their charming story and to Rod for his expert advice and for giving them such a wonderful introduction to BSBI!
Posted by Louise Marsh, BSBI at 23:20