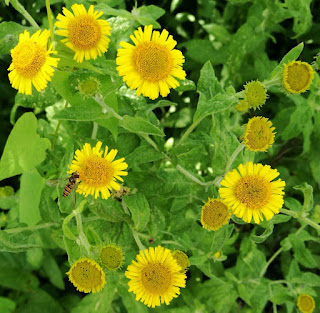 Earlier this month we heard from Claire about the training course she attended at FSC Slapton Ley, having been awarded a BSBI Training Grant.

Now we hear from aspiring botanist Julie was able to attend four one-day plant ID courses during 2019, thanks also to a BSBI Training Grant.

The courses Julie attended were focused on British and Irish plant families, were taught by Mark Spencer and were run by the Field Studies Council.

Over to Julie to tell us more about the course and what she learned:

"The courses were a combination of classroom study with observations in Regent’s Park, including the allotment next to the classroom building. 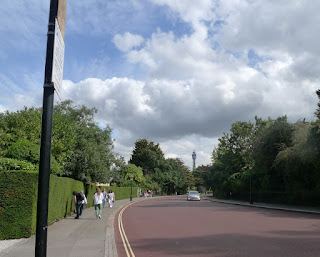 "It was a fantastic four days, delving into plants: how they work and reproduce, how to identify them with a rigorous scientific approach (using a key), learning the appropriate terminology to do so, e.g. hispid – bristly, pustulate – bumps, terete - round, stipulate / ex-stipulate, pinnate / palmate, etc. and many more.

"I gained knowledge of plant anatomy, for example the gynaecium, all the carpels (ovary and ovules inc stigma and style) and the androecium, all the stamens (filament and anther).

"I gained an understanding of flower reproduction, for example, protandry (boys before girls) and its role in preventing self-fertilization and protogyny (girls before boys). 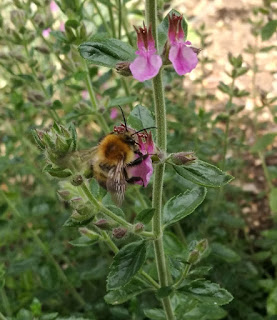 "We learned something of the history of botany and, of course, Carl Linneaus was mentioned (more than once!). A type specimen embodies a species. Plants are ordered in Order, Family (-aceae suffix), Genus and Species. The Family names have changed and some genus / species moved from one family to another, therefore some plant names have synonyms.

"We learned about the history of plants in the UK, an archaeophyte is a non-native that has been in Britain for a long time, e.g. from the Romans. A native brought through natural processes before 1500 and a non-native brought by human activity since 1500. 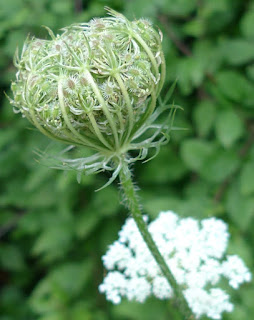 "It’s great to contrast the modern Post Office Tower (I’m showing my age, that’s how I know it) with viewing wild plants in Regent’s Park.

"I think Mark Spencer, our tutor, found some Japanese knotweed in that hedge on the left (image above left). You never know what you’re going to find where, so it's essential to be observant.

"An example of an Apiaceae (formerly Umbelliferae) we saw was wild carrot Daucus carota (image on left) both on the first day and last day, showing its earlier and later stages. An example of a plant we saw in the Lamiaceae family was wall germander Teucrium chamaedrys (above right) which was a new one to me.

"One of the plant families, for example, the cabbage family (Brassicaceae formerly Cruciferae), is quite consistent with 4 sepals, 4 petals, 6 stamens, 2 carpels with ovaries fused but fruits vary from siliqua, longer and thinner and silicula, shorter and fatter. The suture line is visible in the fruit where 2 carpels have fused. 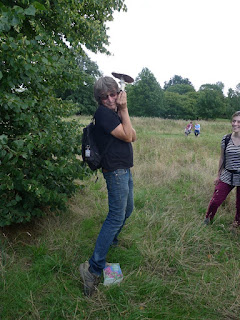 "I find it challenging identifying brassicas I see self-seeding in the urban environment but on the fourth day of the plant family courses I stumbled off the bus right into a very small plant I’d never seen before but on closer examination I saw it had those distinctive long fruits of a brassica we learned about on the first day. I was delighted to find thale cress Arabidopsis thaliana for the first time.

"And later that day Mark was delighted to find a mushroom (on right) he could take home for dinner".

Many thanks to Julie for telling us about the course she attended and what she learned.

Don't forget that applications for Training Grants on 2020 will open here on 1st January, so choose your course (list of providers here) and be ready to apply!
Posted by Louise Marsh, BSBI at 23:58