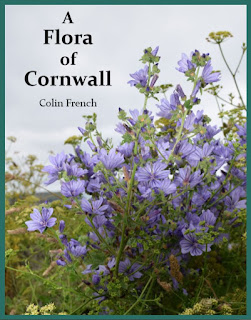 There's a new county Flora in the pipeline and it will be on sale soon for an RRP of £50 but you can save £10 if you order your copy now.

The Flora of Cornwall by Colin French, BSBI's County Recorder for West Cornwall, is a 550-page, full colour, hardback book. It covers 3,018 flowering plants and ferns and includes over 1200 distribution maps and more than 1,700 photographs. There are sections on the effects of climate, geology, soils, topography, mining, quarrying and agriculture and there is also information on vegetation history, key habitats, botanical regions, recording history, losses and gains, and rare and/or threatened plants.

You can order your copy now by contacting Colin at whealagar4@gmail.com. Now read on as Colin tells us about the book, the plants and the county:

"Since 2007, a small group of dedicated volunteers has systematically surveyed Cornwall's wild flowers, visiting as many habitats as possible in every single one of Cornwall's 3,940 one kilometre squares. The result is the most comprehensive and intensive survey ever undertaken in Britain: more than 1.4 million wild flower sightings were gathered and digitised (more than has been collected for the whole of Scotland in that period!), increasing the total number of plant records for Cornwall to 2.25 million. 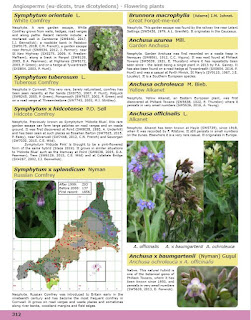 "Cornwall is a special place which attracts legions of visitors from Easter to September who come to experience an exotic land with spectacular unspoilt scenery. It is a land where the place names belong to a different language, with its own culture and traditions. A land where the Cornish have fashioned a unique rural countryside with sizeable expanses of semi-natural moorland and heathland, enmeshed by a cloth of Cornish Hedges and open treeless vistas. A frequent cry is how lucky we are to have so much wildlife habitat and such a rich and diverse environment to live in.

"Sadly such first impressions are deceiving. This ‘unspoilt’ land has been inexorably declining for decades both in the amount of wildlife habitat available and overall biodiversity. By analysing the data collected during this survey and comparing it with historic records, we found that, while no native plants are known to have become extinct in Cornwall since 1982 - in stark contrast to many other parts of Britain - at least half of Cornish natives and archaeophytes were more widespread before 2000 and a minimum of 40% of Cornwall has lost 90% of its flora in the last 50 years. So clearly, Cornwall has not been immune from the immense changes that have been badly degrading the biodiversity of the rest of lowland Britain. 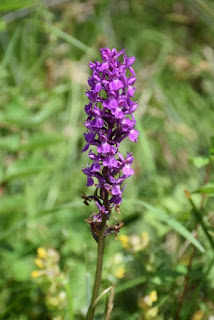 "Many exciting discoveries were, however, made in the course of the survey work for the Flora of Cornwall (sample pages above and below). In total 426 plants were added to the Cornish tally - mostly alien plants/ garden escapes, some of which are new to Britain as wild plants, such as Hook Sedge Carex uncinata which originates in New Zealand.

"Even more exciting was the discovery of two plants which were new to science:
"A number of native plants were also found in Cornwall for the first time, including: 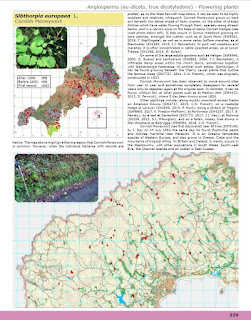 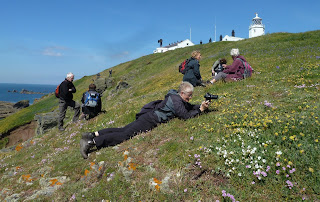 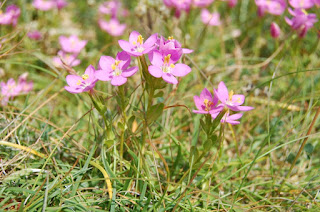 "Sand crocus was found growing on the clifftop near Polruan in 1879 and 1881 and despite repeated searches was not seen again until 2002 at another site on the cliffs near Polruan. The only other site for this extremely rare, distant relative of the garden crocus, is at Dawlish Warren, in South Devon. Perennial Centaury was thought to have become extinct in 1962. It was rediscovered at the same site, near Porthgwarra, in 2010, causing much excitement, as the only other British population is in Pembrokeshire.

"Finally - and surprisingly - 63 endemic plant species were found growing in Cornwall, including Cornish Ramping-fumitory Fumaria occidentalis which is only found in Cornwall and the Isles of Scilly, and Logan’s Sea-lavender Limonium loganicum which only grows near Logan’s Rock, near Porthgwarra".

Many thanks to Colin for telling us about the new Flora of Cornwall. It's obvious that for anyone who lives in or visits Cornwall and wants to know more about its wild plants, the Flora will be essential, but as the above summary makes clear, it will also make fascinating reading for anyone interested in plant distribution and how our wild plants are changing. So if you wish to order a copy of the Flora of Cornwall and save £10 compared to the RRP of £50, please contact Colin now at whealagar4@gmail.com.
Posted by Louise Marsh, BSBI at 12:28