May blossom: in September? 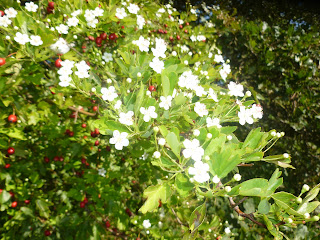 Invertebrate surveyor Steve contacted us this week to say "while conducting a scoping survey for invertebrates near Milton in Cambridgeshire yesterday, I came across flowering hawthorn in a hedgerow. It also had berries. I've never seen this phenomenon before: it's crazy!"

We agreed - hawthorn Crataegus monogyna (and Midland Hawthorn C. laevigata) are also known collectively as May blossom, because that's when they usually flower - they aren't  known as September blossom! But Steve's photos (on right and below left) clearly show both flowers and fruits on the same tree.

We often hear reports these days of plants blooming at unexpected times - our annual New Year Plant Hunt is testament to that. Sometimes we're looking at species known to have a second flowering, e.g. Common Dog-violets bloom in spring, around the Spring Equinox, but they often bloom again in September. 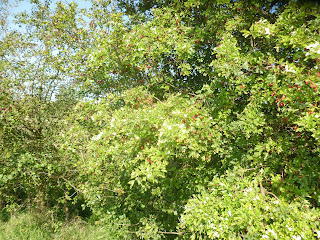 Hawthorns are a different matter though. We've had occasional reports in recent years of autumn-blooming hawthorns, but very few. So, is this a rare occurrence? Is it linked to climate change? Or is this a phenomenon that occurs regularly in the autumn and it's just that few of us have noticed it before? Or if we did notice it, we didn't tell anyone?

Let us know if you're spotting hawthorn blooming this month, or if you have noticed any other examples of unseasonal blooming. And if you're out surveying for invertebrates, birds, mammals, fungi... don't forget to take a good look at any plants you see on your travels - and vice versa: botanists who spot unusual fauna will find the relevant recording societies keen to hear from them. Check out this list of recording schemes and record what you find!