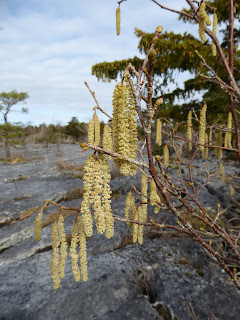 The last report from BSBI President Lynne Farrell was full of talk of icicles and tracks in the snow, but now she is starting to see some signs of spring. Over to Lynne:

"Even though it is still wet, cold and windy there has been quite a lot of activity amongst the botanical community and the emerging plants.

The female flowers are sometimes less conspicuous than the males, but both are needed to produce the next generation. My photograph on the right shows both male and female flowers of Hazel.

Also on the theme of women, we have just welcomed a new BSBI staff member, Sarah Woods, as our Fundraising Manager and you can read an interview with her here.

Two of our BSBI members have been on BBC Radio 4 recently: on Monday, Joshua Styles had a half-hour programme in the series 'My Name Is...' where he talked about plant blindness and why we should all value more highly the tiny plants that grow beneath our feet.

The next day, Mark Spencer featured on 'The Life Scientific', a programme I really enjoy, talking about how he became first a botanist and then a forensic botanist. Plants feature well in both these programmes.

In addition, Louise and I have contributed a presentation entitled ‘BSBI: recording our plants’, to the Buckinghamshire and Milton Keynes Environmental Records Centre (BMERC) recorders’ seminar, to be held on March 13th.

Another opportunity to spread the word about plants and the BSBI's work. We will make the video available afterwards on our BSBI YouTube channel.

Talks will be recorded, so once again, you can catch up later.

I’ve also been helping locally with searching for Daphne mezereum (Mezereon) and D. laureola (Spurge Laurel) neither of which is common in Cumbs and N.Lancs.

Plus I have contributed to a new fingerpost in the AONB along Dollywood Lane, near Arnside. Here I am (image below) pointing in the right direction!"

Many thanks to Lynne for this report and watch out for those videos - and the plants! 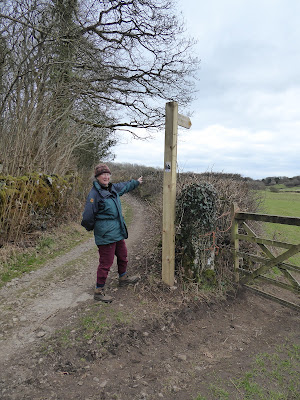