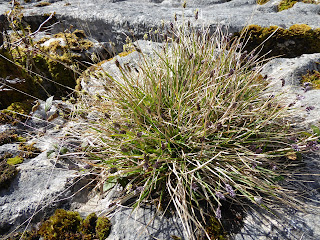 Last month, BSBI President Lynne Farrell was seeing the first signs of spring in her local patch in Cumbria. Now here's her report for April:

I am not sure, as there have been no April showers so far and heavy overnight frosts, snow flurries with bright sun in between.

Some species are struggling into flower and this is a good time to see Violets, so I’ve been out in the local woods, looking at the more common species and Primula vulgaris Primrose. 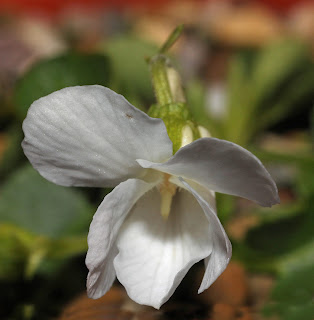 The area surrounding where I live is the headquarters of Sesleria caerulea, Blue Moor Grass (image above right), scattered across open limestone areas in Cumbria and Yorkshire.

In Scotland it is found in Perthshire, and in Ireland mainly along the west coast in Galway and Connemara, and further inland in Fermanagh.

In addition I am including a special species being nurtured in my garden, which has been raised from seed gathered with permission and is now flowering. This is Viola rupestris, Teesdale Violet, which grows nearby and is part of an annual monitoring programme.

The Arnside Knott population is distinguished by its white flowers (image above left). You have to travel much further east into Bulgaria to see it, as it has a restricted European distribution and is a plant of the Euro-siberian temperate element. 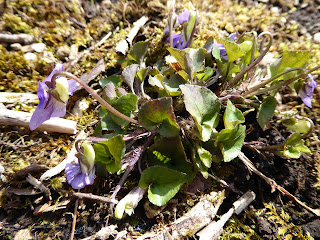 By the way, you can find out a lot more about the Teesdale Violet in this excellent species account which tells you all about the plant's habitat, biogeography, ecology, threats and how to identify it.

There are around 80 Species Accounts prepared by BSBI's Science Team and they are all well worth a look.

But back to violets: the two species most commonly found now are the Viola reichenbachiana, Early Dog Violet and V. riviniana Common Dog Violet (image on right). The excellent BSBI Handbook number 17, Violas of Britain and Ireland, provides details of these, their hybrids and all the other violets you might find. For a beginner's guide to some of the common violets, try Moira O'Donnell's violet crib sheet. It is freely available to anyone getting started with identifying violets. 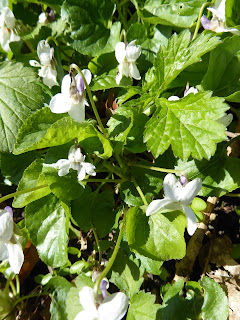 Another widespread species is Sweet Violet, V. odorata, which Mike Porter, one of the Handbook authors, pointed out to me that the white form (image on left) appears to flower earlier than the normal violet-coloured plants.

Does this also happen in other parts of Britain and Ireland? Don't forget to contact your BSBI County Recorder with any interesting observations about violets or any other plants in your area.

Also this month I've been chatting to BSBI's new CEO Julia Hanmer, congratulating my friend Brian Ballinger on his recent award from the Royal Caledonian Horticultural Society and of course looking forward to the next BSBI Handbook which is due to be published later this month with a special offer for BSBI members, but more about that next time. By then hopefully spring will definitely have arrived".

All images on this page courtesy of Lynne Farrell apart from the white-flowered Teesdale Violet image which appears courtesy of Rob Petley-Jones.