In the meadows and on the verges: July report from BSBI President Lynne Farrell 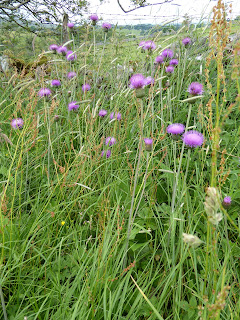 Last month we left BSBI President Lynne Farrell looking at orchids and butterflies - so what has she been up to since then?

"Following rain and sunshine everything is exhibiting lush growth, including roadside verges, which are not being cut just yet in Cumbria, and hay meadows, which are in the process of being cut.

"I was called at short notice by the local Wildlife Trust to survey northern hay meadows to record initial monitoring plots as they were due to be cut in two days’ time. 32 one -metre quadrats done in two days - it was just like being back at Monks Wood in my first job as a botanical assistant, surveying chalk and limestone grasslands for the Nature Conservation Review - only 50 years ago! 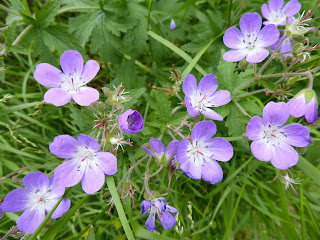 "These hay meadows are not especially species- rich, but they do have characteristic plants, which are both colourful and beautiful.

"Some of them are also to be found on the adjacent roadside verges, which can be a source of seed for re-establishing some ‘missing’ species in the meadows if the management has led to a depletion of them.

Melancholy Thistle Cirsium  heterophyllum (above right), Great Burnet Sanguisorba officinalis and Wood Crane’s-bill Geranium sylvaticum (image on left) are three of these, which are often among botanists’ favourite plants.

"Of course, it is the variety of grasses which also define these wonderful areas. Perennial Rye-grass Lolium  perenne may be present in small quantities, but it is the mixture of several species rather than one being dominant which allows herbs also to share the sward and provide wonderful patches to wander through.

"I, like many other people, have tried to photograph grasses with varying success but here is one I captured and which represents one of the key elements of richer meadows - Yellow Oat Grass Trisetum flavescens (image below). 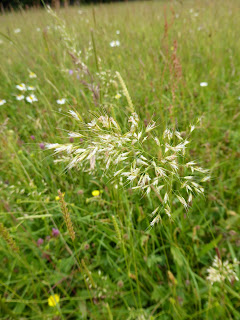 "There are quite a few training courses available at the present on grass identification, so please go along and join one to learn about these important constituents of our fields. In addition, there are on-line courses.

"On another aspect, I’ve been receiving enquiries about exactly where to find various orchid species on Mull (part of my vice-county). This is as a result of several recent publications on orchids - always best sellers, as nearly everyone finds them a fascinating group.

"There are links to various orchid ID books and resources on the BSBI orchid ID page.

"Local expert Bryan Yorke is so keen on them that he walks up Hutton Roof limestone escarpment nearly every day of the year recording his beloved Epipactis species and their hybrids in summer and migrating birds in autumn and spring.

"He produces beautifully-illustrated hand-drawn maps and he also has a well-visited website - well worth a look: https://arnsidesilverdale.blogspot.com/"