"The number of people attending the on-line meetings in late November has been very encouraging, and I would like to reiterate the vast amount of work that goes on behind the scenes to run these events, which we have all enjoyed.

"Thanks go to our staff and volunteers.

"If you were unable to attend, all the videos and exhibits from the Annual Exhibition Meeting and the Scottish Botanists’ Conference are available now, and you can find them by visiting the webpages and clicking on the links.

"I hope that you have all survived the recent storms. Arwen reeked far more damage in the north-west than predicted and some villages in the Lakes are still without power. 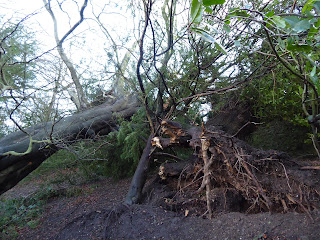 "Arnside did not have power cuts but many of the large specimen trees in the area have been flattened, partly due to the shallow roots on the limestone rocks and partly due to the unusual north-easterly direction of the wind whistling down the valleys.

"The image on the left shows a large Beech which 'dominoed' an Oak and a heritage Pear Tree in a nearby local nature reserve.

"Some neighbours had a lucky escape (see image below right) when the ancient Corsican pines were prostrated, although the tree with the raven’s nest remains standing. As I type this, Storm Barra is now making its attack and it remains to be seen what effect that has produced in the morning light. 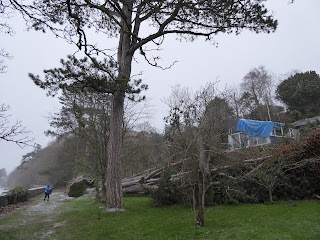 "Owing to unreliable internet connections, I was unable to join the National Biodiversity Network's 2021 conference held recently but will be able to catch up with the recorded proceedings soon. It was an interesting programme, and I was a bit blown away myself as I was made an honorary member of the NBN Trust.

"What else lies in store for us all before the end of the year? Small gatherings of families and friends over the festive period should go ahead this time, and I hope you all have a Happy Christmas. Please join in the New Year Plant Hunt from 1-4 January 2022 and let us hope we do not get totally blown away by it all".