Last time we heard from BSBI President Lynne Farrell, she was looking at mistletoe but as we move towards Spring, what is Lynne looking out for now?

Read on to find out:

"During the past few weeks plants and animals have begun to stir as the days lengthen a little, and I now have three clumps of frogspawn in my garden pond. Most of the local colour is from Spring bulbs, some of which are native in parts of Britain and Ireland and others which are neophytes throughout this range.

Narcissus pseudonarcissus (daffodil) is considered to be native in England and Wales and an alien in Ireland and Scotland, while Leucojum vernum (Spring Snowflake) is a neophyte, being introduced into gardens from where it has spread into the wild with the first wild record being in 1866. Two sites in SW England were thought to be native.

Daffodils, of which we have several species and hybrids, are essentially all neophytes (apart from N. pseudonarcissus much beloved by Wordsworth), including the Tenby Daffodil, N. obvallaris introduced and now naturalised in South Wales. It was St David’s Day on 1st March so were they in bloom then?

Daffodils are also collectors' items, rather like Snowdrops, but I do not know the equivalent name for Galanthophlies. Perhaps someone can inform me?

Spring tidying up (image below) is also in progress after the various storms we have experienced. Fallen trees are being felled, cut up and transported locally for firewood, but many are being left in place in coppices and more inaccessible places to provide wild life habitats in the future.

Several large trees blown down near where I live by storm Arwen, crashed in to the walled garden and damaged several old fruit trees. Work continues to ‘tidy them up’, so that safe access can be gained to the allotments. This will take some time throughout the country and no doubt the recovery will be compared to the Great Storm of 1987. 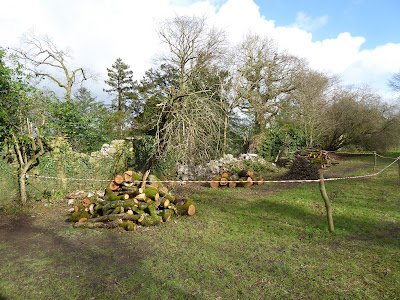