Out on the islands: September report by BSBI President Lynne Farrell 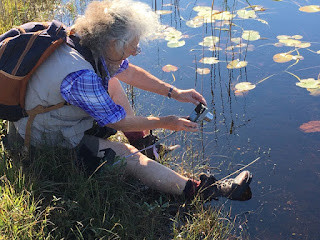 Last time we heard from BSBI President Lynne Farrell, she was looking at restoration sites in Cambridgeshire, where she used to be based, and Cumbria where she is based now.

But as well as being our President, Lynne is also BSBI County Recorder for Mid Ebudes, and last week she managed to visit her patch - here is her latest report:

"I’ve been out on my smaller islands recently, where the weather was superb- it makes a change, and makes the botanising enticing.

"Here are some of the plants I spotted: 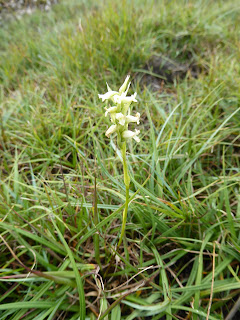 "Irish Lady’s-tresses Spiranthes romanzoffiana (image on left) is one of our rarest and elusive species, but there is more chance of finding it in Ireland, of course! In Scotland it is scattered on some of the islands, with just a few locations on Ardnamurchan, on the mainland. It does occur in the same habitats each year but it would seem not in the exactly the same places, so you have to search diligently, and that is what we did with some success.

"It is a part of the oceanic boreal-montane element widespread in N. America but restricted to Britain and Ireland in Europe. Old lazy beds, and cattle-grazed flushes near the sea are favoured spots.

"Pipewort Eriocaulon aquaticum is also a member of the same botanical element, again restricted to Britain and Ireland and widespread in N. America. On the island of Coll this means a fairly lumpy walk into the ‘interior’ but eventually you reach one of the hidden lochans (image above right and at foot of page) and find it is flowering in late August and into September. 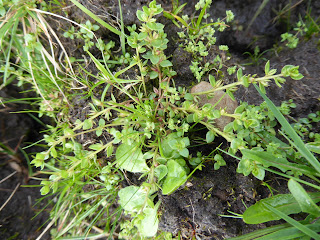 "There are other species which flower in the autumn and although they may be insignificant in size, they are worth close inspection. Muddy trackways, often by farm gates, and island lay-bys with wet gravel and a smattering of peat, are just the places to get down on your hands and knees, to find Chaffweed Anagallis minima/ Centunculus minima (image on right) and Allseed Radiola linoides.

"This often attracts the attention of locals, and several times they enquired as to whether we needed help, assuming the car had broken down. Some were sufficiently interested to get out of their cars and join us, and what’s even more encouraging, was that they were pleased to learn about some of our smallest plants".

That's some great outreach work by our President, spreading the word about BSBI and botanical recording to all the islands, big and small, across Britain and Ireland! 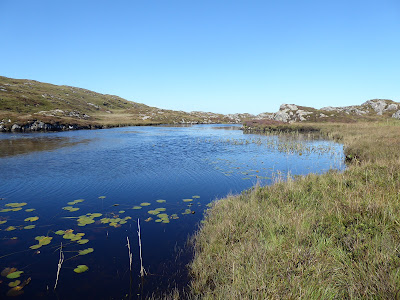