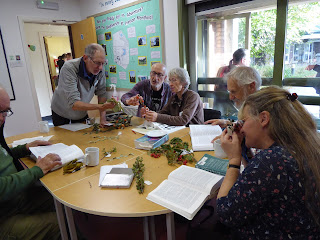 Last time we heard from BSBI President Lynne Farrell, she was checking churchyards for interesting fungi and was getting ready for some big changes. Here's Lynne's latest report:

"Wet and windy weather recently and that has encouraged people to meet again indoors at several excellent events for botanists to gather and reconnect. In late October, a Recorders’ Meeting was held at FSC Preston Montford near Shrewsbury, at which botanists from England, Scotland, Ireland and Wales came together to discuss topics, try and identify the more critical groups such as Cotoneaster (image on right), and generally catch up with each other - splendid. We also fitted in field trips and our group investigated four churchyards, one of which had the Darwin family grave in it, plus several interesting waxcap fungi.

At the beginning of November, I was at the Royal Botanic Gardens, Edinburgh, for the Scottish Botanists’ Conference, which was also well-attended. Workshops, talks, exhibits, herbarium tour and discussions took place. It was a special occasion too, to mark the retirement of Jim McIntosh (image on left), who has been our Scottish Officer for the past 18 years. A packed programme kept us all busy but there was time, just, to chat to people you had not seen for several years, in between the arranged events. I always run out of time to meet all the people I would like to have chatted to, but did manage to catch up with some ‘old’ acquaintances and meet some new members and local botanists. Most of the talks have been recorded so you will be able to view them in future on our YouTube channel.

So now I enter my final stint as President and will be attending the British and Irish Botanical Conference at the Natural History Museum on Saturday 19th November, despite there being no trains from Oxenholme to London, so I will be coming by a devious route and driving most of the way. December will be my last blogpost before handing over to incoming President Micheline Sheehy Skeffington.