BSBI member Dawn Nelson has recently returned from a meeting of the Wildflower Society (WFS) in northern Scotland, and she took to social media to share images of some of the amazing plants she saw.

I always follow Dawn's botanical peregrinations with interest - she won our Star Recorder prize in this year's New Year Plant Hunt and really goes the extra mile to see and record nice plants -  so I'm delighted that she agreed to share a report on her trip with News & Views readers. Here's Part 1:

I am just back from one of the most amazing wild flower trips I have ever been on. This was led by Ian Green, County Recorder for VC95, he knows his patch really well and was enthusiastic and diligent in sharing it with the 11 WFS members who attended.

The first foray on Monday evening was to Culbin Forest an extensive vegetated sand dune area that was planted up by the Forestry Commission after WW2.

It is a treasure trove for Wintergreens and other delights. Pyrola minor (Common Wintergreen) and Goodyera repens (Creeping Lady’s-tresses) were the first plants of interest we found.

After much grovelling for photographs, we moved on to a pond and found Carex oederi (Small-fruited Yellow-sedge), Salix x multinervis (Grey Willow x Eared Willow) and Hydrocotyle vulgaris (Marsh Pennywort) in flower.

Ian gallantly waded in to retrieve specimens of Urticularia australis (Bladderwort) and Elodea nuttallii (Nuttall’s Waterweed) for us to examine.
Driving back, some of the group stopped to take a close look at one of the many huge stands of Heracleum mantegazzianum (Giant Hogweed) that sadly seem only too common in the area.

We spent the morning at Spey Bay near Kingston setting off westward to explore Lein's old gravel quarry, an area that stopped being worked in 1978 and has, in the 46 years that nature has been reclaiming it, become a rich habitat for plants and animal life.

Tiny delights were drawn to our attention by Ian, including Filago minima (Small Cudweed), Radiola linoides (Allseed) and Centunculus minimus (Chaffweed); as well as a good selection of Eyebrights including the dark purple-flushed Euphrasia micrantha (Slender Eyebright) and other interesting plants, including the most north easterly mainland population of Jasione montana (Sheep’s-bit).

However I think the highlight must have been the sheer quantity of flowering Corallorrhiza trifida (Coralroot Orchid) that we saw along the sides of the path through the woods.

Our second stop today was Crooked Wood where beside the layby we found Cotoneaster rehderi (Bullate Cotoneaster) and further into the wood plentiful Trientalis europaea (Chickweed Wintergreen), some still in flower.

We also saw an extensive patch of Linnaea borealis (Twinflower) which sadly had finished flowering but some spent flower stems were found. A red squirrel was also spotted.

Our third stop was Sunbank Park south of Lossiemouth where we found RRR Corynephorus canesens (Grey Hair-grass) new to most of us and a white flowered clump of it too.

Vast quantities of Botrychium lunaria (Moonwort) were seen, which was a frequent encounter throughout the days to follow.

From here we set off back to our various places of accommodation, some going to see Rumex alpinus (Monks Rhubarb), others to see Gaultheria mucronata (Prickly Heath) a delicate alien and much prettier than the far more common G. shallon (Shallon).

Thanks Dawn, that's quite a list - and this is just the first part! Day 2 follows tomorrow. To sustain you until then, here is an image taken by Dawn of Serrated Wintergreen : 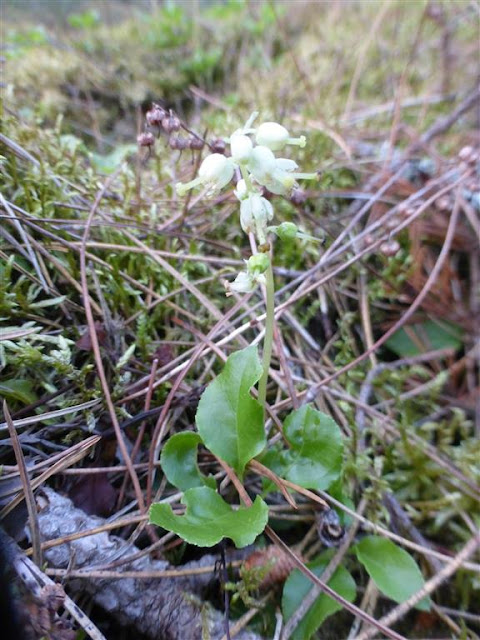