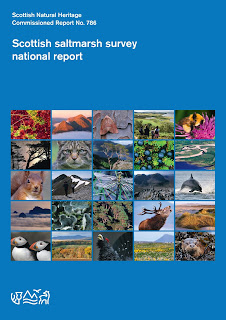 Many thanks to BSBI Scottish Officer Jim McIntosh who got in touch to tell us about a newly published survey of Scottish saltmarsh plants, to which Scottish County Recorders such as Ian Strachan (Westerness) and Theo Loizou (Angus) contributed.


"From 2010-2012 all known saltmarshes larger than 3ha were surveyed across the Scottish mainland and offshore islands, to compile the first detailed comprehensive national survey of this habitat in Scotland.

"All saltmarsh and brackish swamp was mapped using the National Vegetation Classification. All mapped areas were digitised to a 1:4,000 scale GIS database. The condition of each saltmarsh site visited was assessed.

"In total, 249 sites were visited and 7,704ha of saltmarsh were recorded and mapped. Click on the link to download the SNH Commissioned Scottish Saltmarsh Survey Report.

"In the process some 20,526 records of vascular plants were made in 34 vice-counties and these have been painstakingly extracted and tidied up by Stephen Bungard (County Recorder for North Ebudes) and uploaded to the BSBI Distribution Database by Tom Humphrey".

Jim and Stephen also forwarded the link to Iain Macdonald and Stewart Angus, BSBI's contacts in Scottish Natural Heritage (SNH), and Iain replied – “A brilliant piece of citizen science effort this Stephen. You are putting the rest of us to shame! Thank you very much for undertaking this and for placing the records on the BSBI Database.” Sentiments we can all echo!

Extra thanks are due to Stephen who provided the images on this page, which also appear in recent newsletters he has published, such as this one and this one.

To cap it all, I must tell you that Stephen responded to my request for a photo of the front cover of the Saltmarsh Survey and promptly sent me the image at the top of this page even though he was on a ferry at the time - now there's dedication for you!

He was returning to his home on Raasay after giving a very successful talk on the Isle of Skye about his work as a BSBI County Recorder (you can find out more on Stephen's blog). Our County Recorders really are an amazing bunch of men and women!
Posted by Louise Marsh, BSBI at 13:08