Note from the Stoke Herbarium 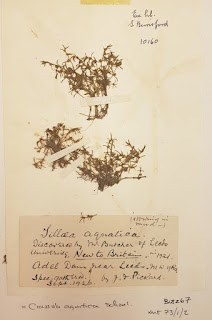 Always a pleasure to hear from Martin Godfrey who sends notes from the Stoke herbarium, where he is a regular volunteer, whenever he spots something of interest to News & Views readers. Over to Martin:

"A continuing project at the Stoke herbarium is to review and catalogue a lot of non-Staffordshire specimens which haven’t been looked at since their arrival over 30 years ago. The bulk is, as might be imagined, very ordinary material but there are a lot of really rare things collected from the first half of the last century and the final decades of the 19th. If every botanist collected rarities like this I am surprised that there is anything left growing on Ben Lawers!

"However I thought I would like to show you a specimen of a species which I have certainly never seen before and until now had barely heard of – Crassula aquatica (as Tillaea on the sheet). This specimen [photo on right] is from the site of its discovery in Britain and this record, at least, isn’t in the BSBI Database.

"It is extinct at its only site in England – discovered in 1921 it was gone, according to Peter Sell, in 1938 and, according to Clive Stace, 1945. It was rediscovered in 1969 at a single site in Scotland. Its status seems a bit odd too. It is widespread in the Northern Hemisphere but gets only a note in the back of Pete Stroh’s England Red List as a naturalised neophyte, whereas in Crawley and Stace’s Alien Plants it is noted as probably a self-introduced native.

"The irony of this is that this odd little plant appears to be extinct in England and very rare in Scotland despite the rather “predatory” habits of its relative Crassula helmsii."

Thanks to Martin for bringing this "odd little plant" to our attention - here's its distribution map so you can play 'spot the dot'!
Posted by Louise Marsh, BSBI at 23:56