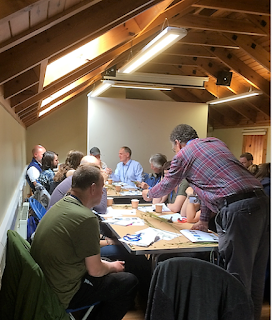 Following hot on the heels of the recent very successful Grass ID Workshop in Stirling, last week beginner botanists in Scotland enjoyed a very successful Sedge ID workshop in Mugdock. Over to organiser Faith Anstey to tell us more:

"Twenty-two people participated in this workshop for sedge beginners at Mugdock Country Park education room on Saturday 20 July. Most were young and working as full-time ecologists and most were from west-central Scotland, although there was a handful from Fife & the Lothians and one from Yorkshire. Only five were already BSBI members but there were quite a few Plantlife members. Four BSBI members – three of them County Recorders – acted as group tutors and another as receptionist!

"The format was a mixture of formal teaching, practical sessions in small tutored groups, and fieldwork. Tutors brought in collections of rushes, woodrushes and sedges. Our first practical session looked at the differences between rushes (and woodrushes) and sedges.  The second looked at the differences between true sedges and sedge allies and finally we examined pre-collected specimens Carex species. 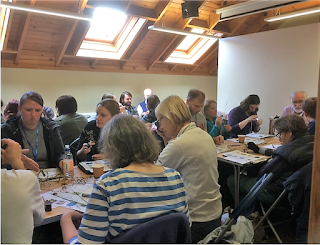 "In the afternoon we looked at sedges in the field. The workshop focused on the 21 common sedge species of which 15 or so were actually seen on the day (of which 12 were seen in the field in total). One of the tutors, Michael Philip, suggested that we round the day off by having an informal competition to see how many of 16 collected sedge specimens people could identify. BSBI Scottish Officer Jim McIntosh gave a short talk on how participants could develop their interest in sedges and the benefits of BSBI membership.

"The accompanying booklet – really a resumé of the course itself – was handed out to participants to consolidate what they had learned. Evaluations showed that participants enjoyed their day and felt their aims (mostly simply to improve skills) were well fulfilled. Although one or two people were almost out of their depth, and one or two knew most of it already, almost all felt that the course was pitched at the right level for them – thanks to the individual approach made possible by tutors of small groups. All rated the leaders knowledgeable (in a couple of cases slightly overwhelmingly so!) approachable, helpful, enthusiastic and similar words of praise..."

I'm not surprised at these words of praise! Who better to learn from than some of BSBI's amazing County Recorders? That's why our local group network is so popular with people starting out in plant ID - a chance to look at wild plants in your local area with the people who know most about those local sites and the plants they support.
Posted by Louise Marsh, BSBI at 16:17