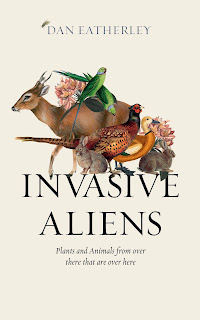 A book published last month sets out the history of plant and animal invaders of the British Isles over thousands of years. ‘Invasive Aliens: the plants and animals from over there that are over here’ by Dan Eatherley has notched up some great reviews; it looks at the non-native organisms which “hold up a mirror to our own species”, the defences we mount against them and what the future might hold.

I interviewed Dan about his new book and we have a competition about alien plants so you have a chance to win your own copy of ‘Invasive Aliens’.

LM: Dan, you have an impressive back-story as a naturalist, writer and environmental consultant. You’ve also worked with Sir David Attenborough as assistant producer on wildlife documentaries for the BBC. So what was it about Invasive Aliens that made you decide to devote a whole book to them?

DE: While TV is great fun and environmental consultancy has its moments, I find writing truly satisfying, because you have the freedom to delve into obscure topics in far greater depth, while still hopefully bringing them to a wider audience. And, you still get to meet fascinating people and visit wonderful new places. My first book (Bushmaster: Raymond Ditmars and the Hunt for the World’s Largest Viper), which told the story of a long-forgotten American herpetologist of the early 20th century and saw me snake-hunting in the forests of Trinidad, certainly ticked those boxes.
For my second book, though, I wanted to write about something a bit closer to home: I had recently become a father and exotic trips weren’t really an option for the foreseeable future. The idea for a book on invasive species in Britain emerged during a chat in 2016 with Myles Archibald at the publishers, William Collins. At first, I wasn’t sure I could write a whole book on them, but as soon as I started researching and talking to people involved in the field I realised I could have written several. The topic is brimming with weird histories, political and philosophical conundrums, and scientific discoveries. My real problem was deciding what not to leave out.

LM: We have the same problem on this News blog, there's so much to say about plants and plant-hunters and there's never enough time or space!
But going back a bit further, I think you started off as a zoology graduate?

DE: Yes, I have always been fascinated by nature so it was the obvious choice. I actually read biology at university, but the modules I took (vertebrates, invertebrates, entomology) turned it into zoology. I wasn’t sure what to do as a career beyond a vague notion of studying wildlife on some exotic island and eventually that led me to work in nature TV in Bristol.
I’m still not 100% sure what I will do when, or if, I grow up.

LM: Oh I hear that growing up is very over-rated, let's not do that... There’s lots of fascinating stuff about plants in 'Invasive Aliens', so I'm sure it will appeal to BSBI botanists. You also write about catching up with one of our BSBI County Recorders – but please don’t tell people which plants he showed you, that’s one of the competition questions below! Did you know about the BSBI before you started researching the book?

DE: When it comes to plants, I am pretty ignorant – as mentioned, I ended up studying zoology at Uni. Given that most invasive species in Britain are plants, I really depended on input from botanists for this book. I have to confess I wasn’t au fait with BSBI before I started, but it didn’t take long before people were pointing me in your direction! I had a useful early telephone conversation with BSBI's Head of Science, Dr Kevin Walker, who was able to put me in touch with local recorders in Devon and Cornwall. Not long after that I was in the field with experts like Bob Hodgson, Phil Pullen, Roger Smith and Phil Hunt trying to learn the difference between Bilbao fleabane and Canadian fleabane.

LM: Those fleabanes are tricky but you were in very good hands! I like this short video, available on your Twitter feed, where you defuse the whole flora vs fauna question by saying that actually you are more interested in humans and how they’ve moved other species around the planet, whether deliberately or accidentally.

DE: Yes. As I have got older, I have got more and more interested in human history and society. I see today’s complement of non-native plants and animals as reflecting our own extraordinary comings and goings as a species: the migrations of early humans from the continent, the first experiments in agriculture, the arrivals of the Romans, Normans and other conquerors, the British empire’s own expansion, each of these episodes from the past has left its trace in our fauna and flora. So I envisaged 'Invasive Aliens' partly as a new and compelling way to tell the story of our own species. Hopefully readers will agree. 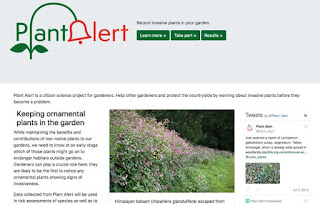 LM Well having read the book (huge thanks for sending me a copy) I certainly agree, it's a great read!
Dan, I wonder if you’ve seen this new project called Plant Alert, where we ask people to keep a close eye on alien plants in their gardens and report any which have the potential to become invasive in future? The idea is to spot tomorrow’s Himalayan Balsam, today!

DE: It sounds like a fantastic initiative and a brilliant way to engage people on the topic.

LM: We hope it will be! Thanks for talking to us Dan and many thanks to your publishers, Harper Collins, for making six copies of ‘Invasive Aliens’ available to the first six people who can answer the questions below correctly – that includes the tricky tie-break! 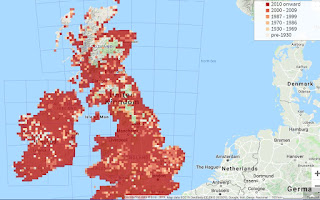 1. BSBI distribution maps show the spread over time of thousands of wild or naturalised plants. Which notorious invasive alien, introduced into Britain in 1825 and first recorded in the wild in 1886, is shown in the map on the right (click on it to enlarge it)?

2. Which invasive aquatic plant, which reached these shores from the USA via the horticultural industry, can spread by up to 20cm each day? Here’s another clue: it first arrived here in the 1980s and by 2017, it was recorded in more than 1000 sites, including along the Rivers Cam and the Great Ouse in Cambridgeshire?

3. In ‘Invasive Aliens’, Dan tells us about a group of “unwanted hitch-hikers” shown to him by Roger Smith, BSBI County Recorder for South Devon. They are associated with Britain’s industrial heritage and originate from as far afield as Chile, Cape Town and New South Wales. What is this group of plants called?

4. As Dan explains, “It wasn’t all one-way traffic!” Which common grass, originating in Europe and sometimes called ‘flea darts’, has become a serious problem for Australian livestock farmers?

5. Alien plants – whether or not they are invasive (most aren’t and we have a few very invasive native plants too!) - are categorised as either:

So, which British county holds the record for the most neophytes? And – a tie-breaker question – how many neophytes have been recorded there?

If you think you know the answers to these competition questions, please send them to me louise.marsh@bsbi.org before 31st August. The first six correct entries will win a copy of 'Invasive Aliens'. Good luck!
Posted by Louise Marsh, BSBI at 15:17