When the first edition of the Vegetative Key to the British Flora was published a decade ago, it quickly became a botanical best-seller, was awarded the BSBI/ Wild Flower Society Presidents’ Award and revolutionised the way we identify plants.

No longer did botanists have to wait for the few weeks or months of the year when we’d see the flowers and/ or fruits which every other ID book asked us to look at.

Suddenly we had a much bigger window of opportunity in which to try and identify plants – if there were leaves and/ or stems, we could at least attempt an ID.

Authors John Poland and Eric Clement have now produced a second edition of the Vegetative Key to the British Flora and it’s due to be published this autumn.

I caught up with John Poland (who is also Chair of BSBI’s Publications Committee) to find out more:

LM: So John, ten years on from the first “Veg Key”, as it’s known to its many friends, what made you and Eric decide to do a second edition?

JP: The original was a good first attempt! But there is always so much more to learn; many diagnostic characters were missed, overlooked or the potential of them wasn’t fully realised until too late.

This second edition hopes to correct this by evolving a more definitive ID guide based on ten years’ worth of collective (and constructive) criticism from botanists who’ve been using the book. Mind you, there’s always room for improvement!

But writing the Twig Key gave me a new perspective on key-designing concepts so some of these have been applied to the new Veg Key to make it even easier for users.

LM: So for anybody who bought the first edition and wonders why they should fork out for a second…

JP: Well, most importantly, every key has been revised to make ID easier and more accurate. We’ve added in more taxa including some hybrids such as the commonly occurring willows Salix spp. that adorn planting schemes everywhere.

New natives such as the Scarce Tufted-sedge Carex cespitosa found in Hertfordshire have been included - always exciting in the hope that shy-flowering colonies will be found elsewhere.

Neophytes are hitching a ride all the time and hortal plants jumping over the garden wall! So it’s important we include anything a recorder is likely to encounter.

Also, everyone likes a bargain - this is an inflation-busting book! Since work first started on the Vegetative Key, we’ve almost covered the distance to the moon, using every mode of transport from hovercraft to helicopters, in a quest to critically examine plants. We think it offers good value for money!

LM: John, you're known for asking botanists visiting the far corners of Britain & Ireland to collect specimens for you, but you and Eric are mainly notorious for spending your holidays not basking on some tropical beach but travelling around Britain and Ireland at your own expense looking at plants yourselves! We’re grateful to you both for your… dedication? obsession?

In fact John, you can't even visit a restaurant without trying to work out what kind of mint is garnishing your pudding (see pic on right!)

Anyway, what about the nomenclature? The first edition used Stace 2nd ed. (1997) names because it came out just before Stace 3rd ed. (2010) was published.

JP: We’ve brought scientific names right up to date in line with Stace 4th ed. (2019). English names are largely unchanged although we have rebelled on the odd occasion, preferring Peanut to Ground-nut for example!

LM: Fair enough. Any changes to how the text is set out?

JP: Before, the text followed a set order, which meant that certain crucial characters weren’t easily picked out. In light of experience (and by glancing at the Veg Key copies of users), it has been restructured so the best key character comes first and there is underlining to highlight these helpful characters hidden in the main text.


We’ve obviously kept with the polychomotous key design as this makes for a speedier key, by setting out all the options.

With all these improvements, does the new book weigh much more than its predecessor?

JP: Remarkably, the weight is exactly the same – botanists have enough stuff to carry with them! In the original preface, we talked about a “bigger and better edition”.

Our kind critics were not happy about the “bigger” bit so we’ve kept the number of pages identical without reducing text size or information. No mean feat but we’ve used space much more efficiently.

LM: Great, so better but not heavier! How about the illustrations? Have you used the same artists and illustrators this time?

JP: The focus has largely been on the text as we wanted to get it as accurate as possible, but Robin Walls kindly provided some more illustrations to fill in gaps and clarify text (particularly with the sedges).

The colour plates by Colin Smith and Niki Simpson have been updated too. One day, we’d like to produce a fully illustrated version – would anyone care to draw?!

LM: Botanical illustrators – form an orderly queue and send me your details, I’ll pass them on to John!

So it sounds as though the “Veg Key 2” is the ideal Christmas present for any keen botanist. But before then we have the BSBI Annual Exhibition Meeting which takes place on 23rd November at the Natural History Museum.

John, your vegetative ID quiz, and the help table where people can bring along difficult live or pressed specimen for you and other expert botanists to identify, have become firm Exhibition Meeting favourites. Will you be there this time?

JP: Of course! It’s the big winter social event for every botanist, is it not? Always fun to puzzle over obscure plant specimens and you never know what someone might bring.

LM: Great, I suspect your stand will be even busier than usual this time. Thank you for telling us about the second edition of the Vegetative Key to the British Flora – and many thanks to you and Eric for producing it!

So at this stage dear readers, you’ll be wondering how you can get your hands on a copy of this amazing new book: there’s a flyer here with details of how to order the book and take advantage of the pre-publication offer.

Unlike the new BSBI Handbook Gentians of Britain and Ireland and the forthcoming Grassland plants of the British and Irish lowlands which have special offers exclusive to BSBI members, John and Eric are very kindly opening up their special offer to all botanists, whether or not they are BSBI members.

So if you’d like to order your copy at the special price of £19.50 inclusive of postage (compared to the RRP of £25 excluding postage), just head over to the Veg Key webpage, scroll down and use our secure PayPal facility.

And once you have your copy, why not get in touch and let us know what you think about it? Or send us a photo of you and your botanical colleagues using the new Veg Key? Like the one below - students on the LUBG 'Botany for Beginners' course all using Veg Key 1st ed to get started with plant ID! 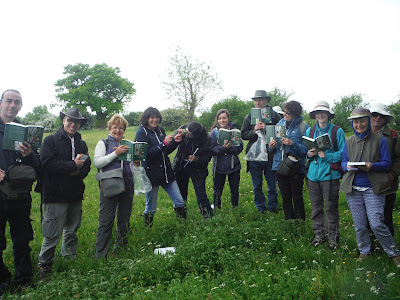