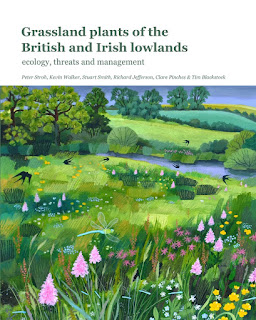 There’s a major new BSBI publication in the offing. Grassland plants of the British and Irish lowlands: ecology, threats and management will be published this autumn and BSBI members are able to benefit from an exclusive offer which will save them £10 compared with the RRP of £35.

There are six authors behind the new book: Pete Stroh and Kevin Walker from BSBI; Stuart Smith from Natural Resources Wales (NRW); Richard Jefferson and Clare Pinches from Natural England; and Tim Blackstock, ex-NRW and now honorary lecturer at Bangor University. I spoke to lead author Pete Stroh and asked him to tell us a bit more about ‘Grassland plants’.

LM: Pete, the new book is just over 400 pages long and covers 109 species considered to be of greatest conservation concern in the lowlands. How long have you and colleagues been working on the book and how did you select which plants to look at?

PS: Well, it all began long before I was working for the BSBI, so it’s at least seven years in the making. The original team, which included Stuart, Kevin, Richard and Tim, but also Carrie Rimes (NRW) and Chris Preston (ex-Centre for Ecology & Hydrology), got the ball rolling about 10 years ago, following the publication of the GB Red List. The Red List was able to compare two Atlas periods, and one of the main findings to come out of the analyses was the number of ‘widespread decliners’ - species that we imagined were doing OK, but actually were not faring at all well, such as Field Gentian.

Many of these widespread decliners are featured in the Grassland plants book, and we also included some that were assessed as being of ‘Least Concern’ in the Red List, such as Moonwort or Bog Pimpernel, because they were known to have undergone considerable declines in the lowland parts of their range. Although lots is known about conservation management and restoration of lowland grassland in Britain, there isn’t much published information on the management requirements of individual grassland species.

The main objective of this book was to assemble in one place all the relevant grey and peer-reviewed literature for our most threatened lowland grassland species so that they might be conserved more effectively in the future. I must also mention that although there are six authors, BSBI members indirectly contributed massively via the plant records they have sent in over the years, and many County Recorders and BSBI expert plant referees either co-authored or made a valuable contribution to individual accounts.

LM: Each species account gives a huge amount of detail: identification, typical habitat, biogeography, ecology, known and potential threats, and management requirements, all illustrated with colour images and BSBI distribution maps. Could you give us an example of one of the plants you focus on and what we might learn about it from reading the book?

PS: Gosh, that’s a difficult one! I’m not sure I can pick just one. The species we write about are so varied – orchids, sedges, cat’s-ears, cudweeds, etc.! I hope that many will find the tips for differentiating similar-looking species useful. They combine loads of different sources, as well as tapping in to personal experience.

The sections on ecology were probably the most challenging to write, as we’ve tried to incorporate all that is known about a species using grey and peer-reviewed literature, meaning you should not have to trawl through loads of reference books and obscure journals in order to know its most important pollinators, or the longevity of seed in the soil, if it’s a larval foodplant for any rare invertebrates, or how it is dispersed.

You can learn about where a species grows, what it grows with, and most importantly, we feel, read tips on how to ensure that it persists and thrives at a site.

LM: It sounds as though the book will be extremely useful to a wide range of people, from land managers to professional ecologists and consultants, to anybody with an interest in, or responsibility for, the care and conservation of our wild flowers.

PS: Yes, I hope so! I see it as a reference book that will actually be useful and read! It condenses a huge amount of information into what are essentially over 100 ‘mini biological floras’ which are, I hope, readable and practical, and are as much use to someone who has one or more of the plants on their land and wants to know more about them, to an academic, to a restoration ecologist. There’s something there for everyone!

LM: I see that there is a foreword by George Peterken – can you give us a taste of what he says?

PS: Well, as many will know, George is a bit of a legend in the conservation world, known originally for his work on woodland ecology, but he’s also an expert on meadows too, and many other things beside. So it was great for him to agree to write the foreword.

It’s kind of difficult to distil what he says into a few sentences, but in essence, he makes the point that although it appears to be superficially simple to create a floriferous meadow, in many cases ancient grassland is as impossible to recreate as ancient woodland, and so keeping and maintaining existing herb-rich grasslands should be the priority, especially because that is where many of the species described in the book will survive best.

He also makes the important point that if someone wants to try and create new grassland, that the best place for this is next to old grassland, and crucially, I think, that planning woodland and grassland habitat restoration together enables some of the natural interactions between the habitats we see as separate, but which would naturally be more connected. I quoted that last bit – much too eloquent and thoughtful for me.

LM: You're too modest! The BSBI Science Team – working with colleagues in other organisations - is building up a superb portfolio of publications. The England Red List, on which you were lead author, is a popular title available for sale from Summerfield Books and the pdf showing statuses of the plants on the list is always among the Top Ten most popular free downloads from the BSBI website. It opened our eyes to the fact that some of the wild flowers that used to be common across the English lowlands – such as harebells, wild strawberries and common rock-rose – are now categorised as Near Threatened.

Then in 2017 there was the Threatened Plants book – here’s the interview we did with lead author Kevin Walker. And that’s before we say anything about your input into our plant distribution Atlases, or the many scientific papers which bear your and Kevin’s names – some examples here and here. You guys are incredibly prolific!

PS:  We try our best to use the plant records that BSBI members provide in order to make a difference, and to ensure that the results of our findings are as accessible as possible for others to use. What we do is part of a collective effort, and it’s incredible really just how much our Society achieves – we certainly punch above our weight, and really that’s down to the County Recorders, expert plant referees and the hundreds (thousands?) of BSBI members who go out recording. It’s also a tribute to David Pearman, who initiated the Science Team over 10 years ago.

I must also mention BSBI Database Officer Tom Humphrey, who does so much behind the scenes and is the rock upon which our outputs are based, and thank the organisations who sponsored the writing and publication of this book. Natural Resources Wales were incredibly generous, as were the National Trust, and we also received support from Natural England, Scottish Natural Heritage, the Wild Flower Society, Floodplain Meadows Partnership, Plantlife and Butterfly Conservation.

LM: Yes, many thanks to all those organisations for their generosity. Pete, thank you very much for talking to us about the forthcoming Grassland plants book. We’d like to congratulate you and all your fellow co-authors for the years of hard work that have gone into this new title. Can’t wait to see the book once it’s published!

The dedicated webpage for the Grassland plants book is here and it will be available to buy at the RRP of £35 + P&P from Summerfield Books and other natural history book-sellers as of 1st December but BSBI members can save money by taking advantage of this exclusive offer: click here to land on the members-only area of the BSBI website (you'll need to have your password to hand) and you will save £10 on the cost of the Grassland plantsbook.

If you haven't yet joined BSBI, you won’t be able to benefit from this special offer, so why not check out this page? It lists all the benefits of BSBI membership and there's a secure payment option, making it very quick and easy for you to become a BSBI member and start getting involved.

October really is the ideal month in which to join BSBI if you haven't already! The special offer on the Grassland plants book runs until the end of November and of course if you join BSBI after 1st October, you get three "free" months and then your subscription starts in January and runs until the end of 2019. This week we are telling you about the other BSBI titles due for publication this autumn such as the new Gentians Handbook and about the savings on offer to BSBI members. Watch this space!
Posted by Louise Marsh, BSBI at 23:41