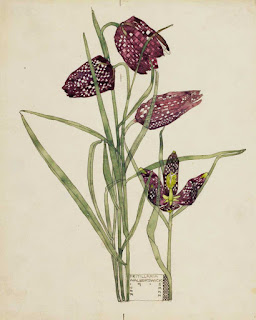 For the Wild Flower of the Month feature in March, Kevin Walker (BSBI Head of Science) told us about Purple Saxifrage and the various treks he's undertaken over the years to see this montane plant.

This month Kevin tells us about a wild flower growing in a very different habitat: floodplain meadows.

Over to Kevin to tell us about Snake's-head Fritillary:

"One of my favourite botanical paintings is Charles Rennie Mackintosh’s exquisite watercolour (on right) of Snake’s-head Fritillary Fritillaria meleagris that he completed whilst recuperating from illness in Walberswick, Suffolk in 1915. Due to the war-time restrictions his activities, which included painting in the open-air and frequent evening walks with a forbidden lantern, were treated with great suspicion by the locals and in the end he was accused of spying, placed under house arrest and banished from East Anglia for the duration of the war.

"Along with the Upper Thames basin, Suffolk has long been seen as a stronghold of ‘native’ populations of Snake’s-head Fritillary. Although Mackintosh’s plant is likely to be garden in origin, there are three large Suffolk populations that have long been considered native, including the magnificent Fox Fritillary Meadow near to Framsden, where it puts on a spectacular display each April (Trist, 1981).

"More has probably been written about the status of Snake’s-head Fritillary than any other British plant. Those who believe it to be native see British populations as the western outpost of a ‘Greater Rhineland’ range that was gradually cut-off from mainland Europe by rising sea-levels, isostatic adjustments and possibly finally by tsunamis created by the Storegga submarine landslip around 8,200 years ago (Oswald, 1994). Furthermore, its main British habitat, flood meadow grassland, is very similar to those in parts of Europe where it is accepted unquestionably as a native species.

"Those who favour non-native status point to its remarkably late year of discovery in the wild (1736) and the lack of cultural references to it in art, literature, architecture, folklore and place names; to them both are inconceivable for such an attractive plant growing so abundantly close to a major seat of learning such as Oxford (Harvey, 1986). Indeed, one of the largest British populations occurs within the grounds of Oxford University’s Magdalen College.

"One of the key arguments supporting it being native is its association with ancient flood meadows, such as North Meadow in Wiltshire where numbers regularly exceed half a million individuals (Wolstenholme, 2011). However, the history of Snake’s-head Fritillary at Sweden’s most famous Fritillary site provides a salutary tale. Kungsängen (King’s Meadow) is a flood meadow near to Uppsala in Southern Sweden where Snake’s-head Fritillary first appeared in the 1740s having escaped from a nearby Botanic Garden. Since then it has spread prodigiously throughout the meadow and numbers are now approach the hundreds of thousands (Zhang, 1983). This shows that large populations in Britain, such as North Meadow, could have originated from garden escapes since it was first recorded. More recent introductions to ancient flood meadows in both Huntingdonshire (Portholme Meadow SSSI) and Yorkshire (Aubert Ings SSSI) are showing just how quickly the size of populations can increase under a traditional hay-cutting regime.

"Although a recent genetic study has shown that British populations are most closely related to populations in Fance (Day, 2017) it fails to provide conclusive proof one way or the other. The historical (documentary) evidence seems to provide a more convincing picture, suggesting a seventeenth century introduction to monastic gardens from whence it escaped along watercourses to meadows downstream (Pearman, 2013). As a consequence, British botanists now accept that it is most likely to be a neophyte.

"Away from meadows, Snake’s-head Fritillary is without doubt a neophyte, introduced into a variety of habitats for ornamental reasons. Of the 500 hundred odd occurrences in the BSBI’s Distribution Database around 90% are deliberate introductions, mainly in urban areas (21%), gardens and parkland (15%), churchyards and other religious buildings (14%), and roadsides (7%). In recent years it has also been widely planted in grasslands as part of conservation and restoration schemes.

"Seduced by its beauty, many generations of botanists have wished for Snake’s-head Fritillary to be native (Harvey, 1986). Its relegation to neophyte status has therefore caused consternation in some quarters but has opened-up a lively debate as to whether we should be conserving non-natives of ‘cultural importance’. Either way its delicate chequerboard flowers, captured so beautifully by the Mackintosh’s transparent watercolours and architectural lines, is likely to remain one of our most cherished wildflowers."

Many thanks to Kevin for telling us about one of his favourite plants. I think that in order to appreciate the Snake's-head Fritillary at its best, you really need to see it nodding in the breeze, with birds singing in the background. We can't travel to see them during lock-down but thanks to the wonderful Joshua Ajowele, who is studying for a MSc in Plant Diversity at Univ Reading, we can enjoy a 5 second video clip of on-campus snake's-head fritillaries + breeze + birdsong by clicking here. Thanks Joshua!