Two grants were awarded this year and, while we were quite prepared once Covid hit to put those awards on hold for a year, both recipients consulted with supervisors and came back to tell us that they would be able to carry out their planned fieldwork safely this year.

Below we hear from the first grant recipient, Dr Emma Karoune:

"With a few special health and safety measures (2m distance or face masks for closer work, and lots of hand gel!) botanical fieldwork is still possible, even at this difficult time. The corona virus restrictions have not prevented the start of my fieldwork project to collect plants for a phytolith reference collection, thanks to the support of a BSBI Science & Research grant. I had planned to recruit a group of volunteers from local BSBI groups in Hampshire, but I was forced to gather a select group of colleagues from the University of Bournemouth and family members to help me get the work done. I hope that I can continue this fieldwork next year in other coastal areas and share my techniques with more botanical colleagues then.

The aim of my research is to develop a new innovative method using phytolith analysis to investigate archaeological and palaeoecological deposits. This method will add to what is already known about the exploitation of plants by past humans and also to investigate long-term environmental and biodiversity change. Phytoliths are microscopic silica bodies that are formed within the cells of living plants from the uptake of soluble silica in ground water. They can be identified to family, genus and sometimes even species level. Their main advantage, over other archaeobotanical remains such as seeds and pollen, is that they survive well in most conditions for thousands of years and are therefore found in most ancient sediments. They can help to fill in gaps when preservation of other more routinely used botanical remains are poor. 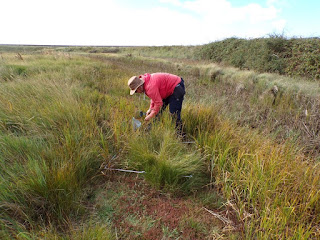 My project must start with the development of a reference collection for the British Flora, which I am building in collaboration with Historic England and other archaeobotanical colleagues from the University of Bournemouth. There is very little work in this particular discipline related to British plant taxa and therefore archaeological investigations using phytoliths in this country are currently limited. I am starting the reference collection by working on southern coastal plant communities at Farlington Marshes and Eastney Beach, close to Portsmouth in Hampshire. I am concentrating on collecting plants from saltmarsh, grazing marsh and shingle/sand dune communities. I will expand this project next year to sample in other coastal areas such as Poole Harbour and West Wittering/East Head to sample in these types of plant communities again to increase the reliability of my findings and therefore build a more robust method.

Farlington Marshes is an important site for bird breeding, and it is popular with bird watchers but it also has interesting plants. I selected three locations to sample that were typical of different coastal plant communities: lower salt marsh, upper salt marsh and grazing marsh. At each location I collected samples of the different species of plants so that I can use them to examine the phytoliths within them to form identification criteria for each species. I also used a 1m2 quadrat to collect the above-ground plants and take soil samples of the topsoil so that I can examined the differences in the overall phytolith assemblages. This will determine how to recognise each plant community as a whole and I can work out how to distinguish each plant community from each other so that I can then recognise them in ancient sediments. 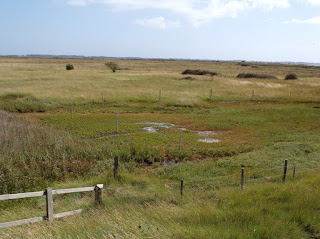 The lower salt marsh area near the lakes and extensive reed beds of Common reed Phragmites australis was the most difficult to sample in terms of muddiness. We had to make sure that we were only there at low tide otherwise we would get stuck in the mud, but it was a really special place to work. During high tide the area nearest the lake is partially submerged and this makes the purpley green Samphire glisten in the sun. Consequently, the area is dominated by plant species that are used to being wet from the tidal ingress such as Samphire Salicornia spp., Sea Purslane Atriplex portulacoides, a cord grass Spartina sp. probably Common cord grass Spartina anglica, Sea Aster Aster tripolium, Annual Sea-blite Suaeda maritima, Lesser Sea-spurreySpergularia marina and Sea plantain Plantago maritima. There is also some Saltmarsh rush Juncus gerardii and Saltmarsh grass Puccinellia sp. in the slightly less wet areas further from the lake.

The Point field at the south end of Farlington Marshes is an upper salt marsh surrounded by the sea wall on three sides and bramble bushes on the other side that leads to the grazing marsh. This area has not been grazed for many years and is dominated by large tussocks of Creeping Bent Agrostis stolonifera and Sea Couch Elymus aethericus. There are also some wet loving species around the edge of the field close to the stream such as Saltmarsh rush Juncus gerardii and Sea club rush Bolboschoenus maritimus with its beautiful star shaped inflorescence. It was very dry in this area when we sampled but some of the birdwatchers told us that it is normally flooded and boggy for parts of the year. 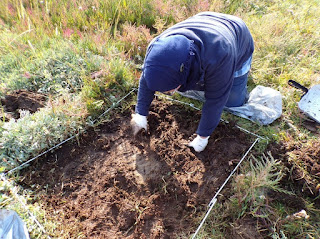 The third area sampled was the main grazing marsh. The flora in this area was much less dominated by grasses than the Point field due to the heavy grazing of cattle for most of the year. A. stolonifera did occur throughout but also species indicative of a neutral grasslands with grazing such as Crested dog’s tail Cynosurus cristatus, Red clover Trifolium pratense and Plantain Plantago sp. There were also sunken areas that I assume must flood at wet times of the year as they contained rushes – probably Hard rush Juncus inflexus.

I have been kindly helped with identification of the plants collected by Tony Mundell and Martin Rand, the BSBI County Recorders for Hampshire. It is best to collect plants in late August and September for phytolith reference collections as this allows for the largest production of phytoliths to take place. However, some species were more difficult to identify at this time so still need further identification work next year. I am planning to return to Farlington Marshes in the Spring and early Summer to collect these species when they have floral parts.

I am currently drying and cataloguing all the plants I have collected, and I will be spending the winter in the laboratory preparing the samples for analysis. Hopefully, next year I can report my findings so look out for another blogpost then.

I want to thank the BSBI for the Science & Research grant as without this support I would not have been able to conduct this research. Thanks also goes to Tony and Martin for their expert botanical knowledge. I could not have completed all the sampling without my dedicated team of volunteers that included Siggy Osbourne and Dr Sarah Elliot from the University of Bournemouth and also my son, Akram, and my Dad, Roger. Thanks to Chris Lycett of the Hampshire Wildlife Trust who gave me permission and help to access Farlington Marshes. And finally, thanks to Historic England for supporting my reference collection work.

If you want to find out more about my research and what I will be doing next with the plants and soils that I collected, then please take a look at my poster presentation from Saturday's  BSBI Exhibition Meeting".