Paul Green returns (for a while) as BSBI Ireland Officer

Last year we welcomed Sarah Pierce as our new BSBI IrelandOfficer and now that Sarah has gone on maternity leave, it’s time to welcome her maternity cover, Paul Green. Paul‘s name will be familiar to many people in BSBI as he has previously filled the role of our Wales Officer – not once but twice!

I caught up with Paul and asked him to tell us more:

LM: Paul, it’s great to be working with you again – welcome back! Before we talk about your new role, could you tell us something about your previous times as a BSBI staff member?

PG: I worked as the BSBI Wales Officer from 2012-2015, covering Polly Spencer-Vellacott while on maternity leave, and we also job shared during that time. I stepped back into the role for six months in late 2017, as Polly’s family had decided to relocate to Scotland. I had a desk space in the National Museum of Wales, Cardiff.

LM: And you’ve also filled the role of BSBI Vice-County Recorder (VCR) more than once I think?

LM: And I think you were working with Sarah to get the Aquatic Plant Project set up?

PG: While Sarah settled in as Ireland Officer in 2019, I was working in the background organising the Aquatic Plant Project. Working out sites to visit, species we had to re-find at sites, advertising the project etc. Nick Stewart led the training days, he knows everything you need to know about plants growing in water, and explains how to identify them in an easy way to understand.

LM: So you know BSBI inside out! What will your main duties be as Ireland Officer?

PG: It will be working with members in Ireland in every way I can be of help, and with staff members across BSBI. Promoting BSBI as much as possible, and hopefully being able to get out in the field with botanists in Ireland.

LM: And could you take us right back to the beginning – how did you first get attracted to botany?

PG: I have always been into all wildlife since I was a very young child, but can’t remember when it was just plants that I wanted to know their names. All other wildlife groups I’m just happy looking, not being that bothered what they are.

LM: And what happened next? How did you build up your botanical skills?

PG: I'm completely self-taught, with a little help from my grandmothers, as one loved wildlife and the other gardening. I never intended making a living from plants, it came about by chance when in 2004 Ian Bennallick said Greentours Natural History Holidays were looking for botanical leaders, he put my name forward. Ever since, I have been making my living from plants.

LM: So now you are Ireland Officer, and in this strange Covid world I guess you’ll be working from home – whereabouts is that?

PG: I’m based 6km from the south coast, at Ballycullane, Co. Wexford, in the southeast of Ireland. Because of Covid-19 restrictions I’m working from home. My botany room has been converted into my Ireland Officer office. I have a large collection of botany books from all around the world, which take up one entire wall space. For example I have a near complete set of the Journal of Botany dating back to the 1860s. 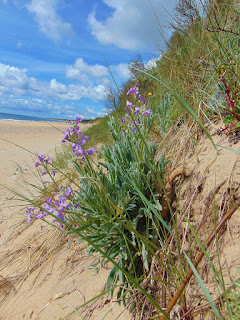 LM: Well that's fitting, as you are also editor of Irish Botanical News! So what’s next on your To Do list? Apart from the NewYear Plant Hunt of course - you’ve notched up some great Plant Hunt records over the years!

PG: I generally like to botanise in my home patch, rather than travel miles. This year I took on a new challenge, to see how many of the monads in Wexford that had 14 or less species needed to bring their total of species recorded up to 200. I started this on 1st January when I took part in the New Year Plant Hunt and did a circular walk in a monad, easily finding the 4 species I needed. On average I generally added 30-40 new species to each monad. I love just being out looking at plants, and seem to have a lot of luck finding the unexpected, for example in 2019 I was walking along the beach at Morriscastle, Co. Wexford and refound Sea Stock Matthiola sinuata, (image on right) which had been thought extinct in Ireland since 1933.

LM: That was a great (re)find! Can we follow the latest news about your botanical finds on social media?

PG: On Twitter I can be followed at @BSBI_Ireland (the BSBI Ireland Officer's account) and @WexfordBotany1 (my VCR account). I normally tweet at least once a week, and always try and put something flowering up for Wild Flower Hour that I have seen during the week.

LM: Well, many thanks for talking to us Paul and again – welcome back!