Toothed Fireweed: a glimmer of light in a devastating year 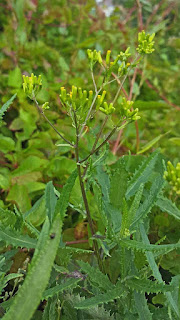 Over to Zoe to tell us more:

"The year 2020 took so much and gave very little in return. There were many negatives, very few positives and it will be long remembered as a year of devastation to the many who lost loved ones. A tiny glimmer of light that I will recall was what happened, botanically-speaking, within my home place.

My first sighting of Toothed Fireweed Senecio minimus had been on St Stephen’s Day, 26th December 2019, when I took a short wander from my home in Dalkey, Co Dublin, to walk off some of the previous day’s excesses. It was growing on the top of an old granite wall at the top of a steep embankment, the DART railway tracks some 50ft below and I knew I had never seen the leaves of this plant before. All I could see that remained of its flowering was a few straggly bits of dead pappus. So at least it was probably a member of the Asteraceae family, I thought. It seemed like a good time to wish my friend, Paul Green, the season’s greetings and also to show him my photograph of those leaves. Within a very short while, my curiosity was satisfied by an identification. But what, I wondered, would the flowers look like? Where had the plant come from and how did it get there? I had no idea when it would flower and I hoped it wouldn’t be in summer as I usually desert Dalkey, at that time, for diverse parts of the country. However, other events took over. 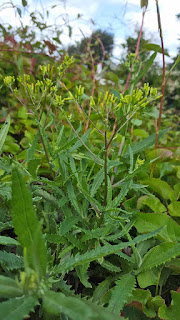 With the devastating arrival of the coronavirus to our shores, and the threat to the health of the nation, a tight lockdown was imposed. Initially, being of an age I’d rather forget, myself and my husband, Pete, were instructed to remain firmly within our home and garden. Our garden being tiny, this was very tough but we obeyed. We had already experienced the loss of our son, Nik, who fell foul of the virus in the UK in March. We would do our best to minimize any further distress to our family.

Within a few weeks, the restrictions eased slightly and we were permitted to take exercise within a radius of 2 km of our home. I got to know every crack in every pavement within those 2kms. In fact, we didn’t have the benefit of a full 2km because with Dalkey being a coastal town, half of our radius was in the Irish Sea! But those cracks in pavements generated a form of manna from heaven. With the local council also locked down, no street cleaning was taking place so the streets became fringed in green, apart from a couple of areas where ‘neat-freak’ neighbours had dosed their bit of pavement with herbicide and a horrible, dead, brown fringe betrayed their distaste for nature. Fumitories, Sow-thistles, Long-headed Poppies, Common Mallow, Ivy-leaved Toadflax, Welsh Poppies, Chickweed, Speedwells, Forget-me-nots and Purple Toadflax were among the many ‘weeds’ which were left in peace for several months. 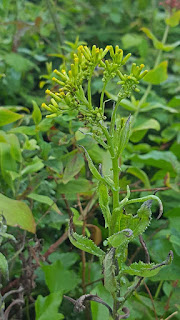 However, my exercise route on most days took me past the Toothed Fireweed and I watched closely as its stems emerged from its lower leaves. Eventually I got to see the flowers. Miniscule, tight, cylindrical bundles of yellow disc florets with short, thread-like outer florets were held in abundant panicles on tough green-dark purple stems. I also found one other plant growing at the same site and even spotted a few small specimens in some pavement cracks at least 100m away. I wondered if ‘my’ plant would survive or would I never see that species again. Coming to this country from New Zealand and Australia where it flowers throughout the year and is predominantly coastal, it is also established on the Pacific coast of the USA.

Our lockdown was lifted in July and we left Dalkey for some months but returned in November as the weather was cooling. I couldn’t find ‘my’ plant as the entire area had been overwhelmed by Russian-vine, but I walked further and took myself into Sorrento Park. This public space had been upgraded and landscaped in the time we were away. I was glad to see that although flowerbeds had been created and garden plants installed, large patches of wild vegetation had been left alone. I had previously found White Comfrey, White Ramping-fumitory, Heath Groundsel and Hedgerow Crane’s-bill thriving among many other species. But I was absolutely amazed to see how many plants of Toothed Ragweed were spread across the wild patch. I lost count at forty.

My botanical knowledge was further increased – again with the help of Paul Green – when I found that what I had taken to be Common Ramping Fumitory growing in the grounds of a nearby convent was, in fact, Common Fumitory. Paul asked for further photographs in order to confirm the identification and eventually he discovered that not only were those two species growing in the convent grounds but there was also quite a lot of Purple Ramping-fumitory and Tall Ramping-fumitory present. If I had not been obliged to spend so much time in such a small area, I doubt I would have ever seen any of these species".

Many thanks to Zoe for telling us about her botanical discoveries and for sharing the images on this page, all taken by her.