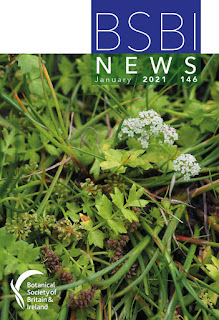 The latest issue of BSBI News has been mailed out to more than 3,200 members and should be dropping through letterboxes in the next day or two.

The 2021 BSBI Yearbook will also be in the mailing - I can't tell you anything more about the Yearbook, it's strictly members-only, but I can give you a taster of what's in BSBI News #146!

The opening story, about the astonishing appearance of Creeping Marshwort at a site in West Suffolk, most probably arising from the seed bank following disturbance as a result of conservation management, has already been covered on this blog and in a poster at the BSBI Exhibition Meeting.

Frankly the discovery, made last summer, was too jaw-dropping to sit on for months! 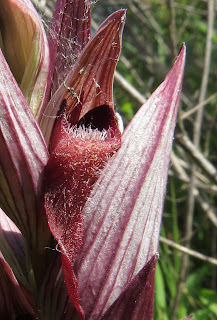 But the second feature, about the first British or Irish record of Long-lipped Tongue-orchid, was news to me and very exciting - vehicle-assisted dispersal is believed to be the vector here.

Three cheers for sharp-eyed Daphne Mills of the Kent Botanical Recording Group who spotted the Tongue-orchid and took the image on the left.

A third surprising find is reported by Carl Sayer and Jo Parmenter who write about the work of the Norfolk Ponds Project and the first confirmed county record in over a century of Grass-poly at a pond restoration site in East Norfolk.

A fourth surprising find - there's a definite theme to this latest issue! - comes from Robbie Blackhall-Miles who reports on the discovery of a second extant plant of the Catacol Whitebeam Sorbus pseudomeinichii, one of the Isle of Arran's ultra-rare whitebeams and arguably one of the rarest trees in the world (there is one further up the glen but no others anywhere on the planet!). 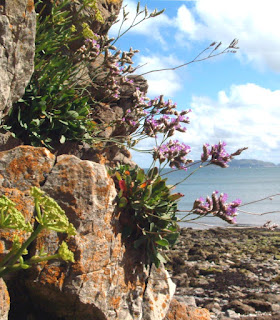 To complete the quintet of surprising finds, Melinda Lyons reports on the second record for Ireland of Mibora minima, a tiny grass species found on North Bull Island in Dublin Bay, whose only previous Irish record was in dunes in West Cork. There are four other featured articles but I'll just mention two of them: Alla Mashanova's fascinating article about using dash cams for recording plants on road verges and Ivor Rees's piece on Large Sea-lavender (image on right) which has managed to resist the impacts of some very stormy weather: Ivor considers why this might be the case.

I'm still less than halfway through the 88-page issue so time to summarise a bit more: the regular 'Introducing my vice-county' page is an account by County Recorder Paul Smith about the Outer Hebrides.

Type Outer Hebrides into the search box on the right to read some of the many reports, such as this or this, about Paul's recording trips to various Outer Hebridean islands. 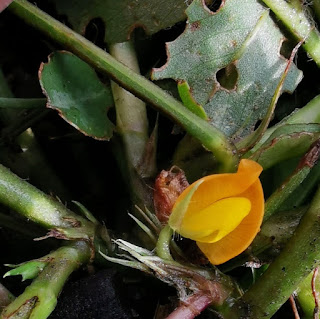 And if you follow BSBI on Twitter, you'll recognise Paul's photo of Starry Saxifrage: it's our header!

The eight-page 'Aliens and Adventives' section includes some of the surprising alien plants that have turned up across Britain and Ireland, such as this peanut (image on left, taken by Graham Clark) flowering in North Essex.

Richard Milne reports on the problem of naming British Rhododendrons, including that scourge of conservation managers, the colourful but highly invasive Rhododendron ponticum.

There's an eight-page round-up, curated by Pete Stroh, of botanical news from across England, Ireland, Scotland and Wales; readers' letters; five pages of book reviews compiled by Clive Stace... not to mention various inserts, including a flyer telling you how to claim almost a third off the price of the latest BSBI Handbook. 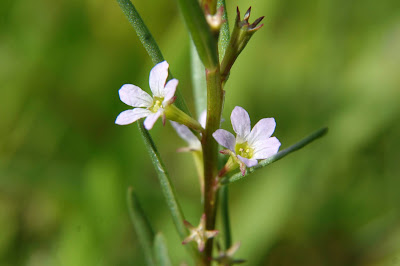 You can now download a sample issue of BSBI News for January and there's one free article in full, both aimed at showing non-members just what they are missing.

Head over to this page for those  sample issues and free articles or, if you've already decided you'd like three copies each year of BSBI News plus exclusive access to 100+ expert plant referees and a whole host of other membership benefits, then head over here and join us now: we'd love to welcome you as a member!

For now we'll leave you with this lovely photo (above right), taken by Rob Peacock, of the Grass-poly from Norfolk.