Forecast: a Diary of the Lost Seasons: read the interview, enter the competition, buy the book! 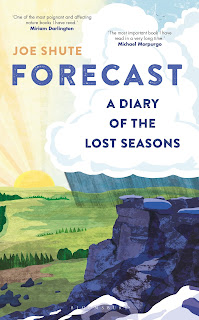 A new book published on 24th June examines how the seasons are changing and how, as flowers bloom ever earlier, birds no longer fly south for the winter and reports of flash floods and wildfires fill our news feeds, we are becoming increasingly disconnected from the seasonal milestones of the past.

Author, journalist and weather watcher Joe Shute writes the ‘Weather Watch’ and ‘What to Spot’ columns for the Daily Telegraph. In Forecast, he travels all over Britain to report on the growing gap between our cultural expectations of the changing seasons, shaped by folklore, custom and childhood memories, and what we actually experience nowadays.

LM: Joe, congratulations on the book and many thanks to you and Bloomsbury for sending me an advance copy. It’s a great achievement but I’m not sure whether to be delighted at your beautiful writing or heart-broken at the picture you paint of a world where the seasons are increasingly ‘out of synch’, which could have terrible consequences for our wildlife. Do you think this mixture of delight and regret is likely to be a common reaction among your readers?

JS: I want Forecast to be a hopeful book and one that inspires readers. Clearly the seasons and weather patterns are changing at what is quite a frightening rate and that is having a real impact on the natural world but as I hope I’ve shown in the book nature is remarkably adaptable as well if we only give it a chance. I’ve given examples such as on Saddleworth Moor, where conservation work to re-wet the peatlands after the worst wildfire in living memory is having a real impact on increasing numbers of threatened wildlife and communities rallying together in the face of increased flooding to hopefully show that there are solutions to what lies ahead of us.

LM: Yes, that chapter ‘Muirburn’ was really moving and it was great to hear about your return visit on the first anniversary of the fire, and the amazing work being done by Kate Hanley and her team. You also joined one of our New Year Plant Hunts last year, spending the day with our Head of Science Kevin Walker as he – and almost 2000 fellow plant-hunters across Britain and Ireland – went out to see how many wild or naturalised species they could find in bloom. The ‘Budburst’ chapter in your book is a wonderful account of your day plant-hunting with Kevin, it really brings to life what happens at one of our field events! Were you surprised that we are finding hundreds of plants in bloom at New Year: 615 last year and the total went up to 714 this year? What was your take-home message from your day with Kevin and his team in Yorkshire?

JS: Yes I had a fantastic time with Kevin and the BSBI volunteers and if I recall some lovely mince pies too! I am much more comfortable going bird watching than plant hunting so it was a real privilege to tap into some of the expertise of the BSBI plant hunters and the number of species we did find in bloom was very surprising. Through the New Year Plant Hunt, the BSBI is clearly amassing some very important data on the way the weather is shaping the natural world. I suppose the take-home message was the sheer number of flowers we are likely to see out on even the coldest winter's day - and to not always be scanning the skies for birds!

LM: That’s always a problem for those of us who love all wildlife, not just plants – do we look up or down or risk a crick in the neck trying to do both! Some naturalists become very pessimistic at the thought of all those species that will be negatively impacted by climate change: the migrating birds blown off course by unseasonal winds and the plants that cannot adapt quickly enough, that are not knocked back by frost so have to, as you say so eloquently in the book, “linger on, drawing on whatever energy reserves they can muster and persisting wearily into the spring”. But other wildlife-watchers are more optimistic, pointing to the chance to see Mediterranean birds like the hoopoe in the UK, and the opportunities for colonisation – the bee orchids and southern marsh orchids spreading northwards, for example. Whereabouts do you sit, on balance: are you a glass half-full or half-empty sort of person?

JS: I’m a natural optimist so will always prefer the glass half-full approach. There was a recent study which found climate change was impacting on one third of UK birds but we need to be careful to say that this is not always in a negative way. Species like blackcaps, for example, are increasingly over-wintering in the UK while smaller birds such as long-tailed tits, goldcrest and wren are also coping much better in what are increasingly frost-free winters. I’m also a big fan of ring-necked parakeets which have now spread as far north as Glasgow where they are said to be the most northerly flock of parrots in the world. There are of course many native species that are really struggling as a result of climate change and I tried to tell their stories in the book as honestly as I could, but it is not all doom and gloom.

LM: Well I think you nailed it and managed to give us both sides of the story, and there are certainly some plants that are benefiting from the changing climate. Of course, as you point out in the book, a decade’s worth of New Year Plant Hunt data isn’t really “enough to demonstrate the effects of long-term climate change on the flora of Britain” but it’s a start and it builds on the work Richard Fitter started in 1954 and which his son Alastair, one of our trustees, has continued, recording the first flowering dates of plants in their garden: some interesting examples in this video recorded by Alastair. We’re always keen to get more people involved in biological recording so we can build up more data. Do you think reading Forecast might make some people keen to become part of that growing army of citizen scientists?

JS: I certainly hope so. We are blessed in the UK with such a dedicated army of amateur naturalists whose observations are key in explaining the changing world. Phenology, which is the name for studying the changing seasons through nature, is very labour intensive and relies entirely on the work of volunteers and research such as the New Year Plant Hunt. I'm looking forward to taking part again next year!

LM: It’s a date Joe, we’ll look forward to seeing you at New Year! Meanwhile, all of us at the Botanical Society hope that Forecast will be widely read and will open people’s eyes to how our climate is changing and the impacts on our wildlife. Thanks for talking to us and again, congratulations on the book, it’s superb and deserves to be a great success.

Joe’s publishers, Bloomsbury, are making three free copies of Forecast available to News & Views readers. They will go to the first three people who can answer these questions correctly UPDATE 6th July: all three copies of the book have now been posted to the three winners, so we can now reveal the answers to the competition questions (bolded below):
Q1. Kevin Walker told Joe about the four wildflowers most frequently recorded in bloom during the New Year Plant Hunt – what were they? A: Daisy, groundsel, dandelion and annual meadow-grass.
Q2. Who was the pioneering C18th parson-naturalist who recorded the natural history of his Hampshire parish throughout the year? A: Gilbert White.
Q3. Which is the only British tree named after the month in which it (usually) flowers? A: Hawthorn (may-flower).
Q4. Who was the pioneering meteorologist who first coined the term “forecast” and established what would become the Met Office? Hint: you’ll hear his name every time you listen to the shipping forecast on the BBC, because one of the shipping areas is named after him! A: Robert Fitzroy.

Congratulations to our winners, Alice, Heather and Katy - we hope they enjoy their copies of Forecast. For everyone else, the book is available to buy in all good bookshops and Bloomsbury have very kindly offered BSBI members a discount if they’d like to buy a copy. I imagine many of our members will want copies either for themselves or to give as presents. If you are a BSBI member, just go to the password-protected members-only area of our website (email me if you’ve forgotten your password) and follow the instructions there – you’ll be able to claim 25% off the RRP of £16.99, so you pay only £12.74.