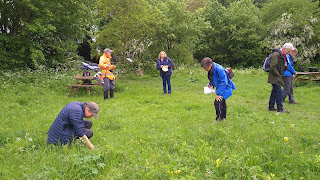 Now read on to find out what Sarah made of her day in the field...

"I had no idea what to expect when I stepped off the train in Cambridge for my first ever BSBI field meeting; but thanks to Jonathan Shanklin’s comprehensive and reassuring advanced emails, and a judicious warning from a friendly soul to prepare for all weathers, I felt I at least had the gear to survive the day without embarrassment on the kit front. Whether I’d know my hogweeds from my horsetails remained to be seen…but as the day was aimed at botanical beginners, I felt reassured that I’d be in safe hands. 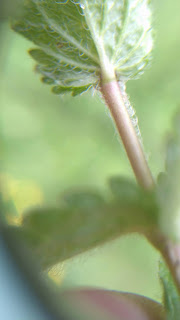 "There was plenty of high spirits amongst the participants as we arrived in Trumpington Meadows, it being the first time many of us had been to any such event in over a year. Jonathan was quick to gauge the range of experience of the group, from myself as the true beginner, to some who were keen to learn more about the specific characteristics of local sedges and grasses (“Sedges have edges” is just one of the gems that has stayed with me). The ease with which information and interest was shared amongst the group made the day even more enjoyable; when an expert question was being asked in one quarter, someone was always happy to help me work out whether I was correctly spotting something we’d seen earlier, or if I’d have to key out something new.

"As a complete novice, a couple of features of the meeting stood out in particular; number one being the amount of time it was possible to spend in an area the size of a squash court (image above right). The newly established meadow just beyond the meeting area was Jonathan’s jumping off point for us, demonstrating how the redevelopment of a habitat through sowing could see a progression from domination of one species to slow integration of many, many species. It was fascinating to see the level of detail he was able to recall about individual plants, but also to navigate up close the process of deciding what features of a plant distinguish it from its near neighbours when using a key. I particularly enjoyed the fringing of hairs to either side of the stem of a Veronica chamaedrys (Germander speedwell) – apparently likened to the fringe of Native American hide pants" (images above left and below right). 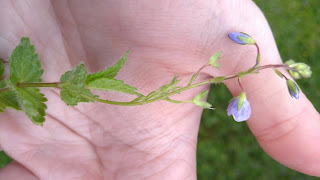 LM: There are lots of mnemonics and visual comparisons used by botanists to remind themselves - and each other - of what a particular plant looks like and how to distinguish it from all the other plants that look superficially similar. So at this point, reading Sarah's report, I just had to send her a link to the Speedwell ID sheet commissioned by Rebecca Wheeler and prepared for Wild Flower Hour by Moira O’Donnell. Moira looks at the fruits of speedwells and IDs them due to their similarity to…  a part of the anatomy usually encased by pants… oh, take a look at the ID sheet so you can see for yourselves! 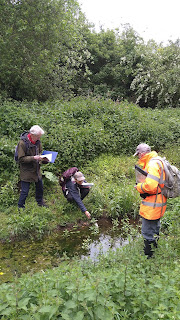 "The second feature that became apparent was the wealth of inherited data and knowledge that such work draws upon – it was brilliant to have supplied for us the species data for the site and to watch Jonathan perform his recording duties as we began to travel through the site. This window into the activities of an expert, and the process of recording, made the day all the more aspirational for a naïve but keen newbie!

"A number of discussions over the course of the day helped me put my own purpose and goal for the day into perspective, as we moved from looking at the different habitats of pools (apparently formerly favourite bathing spots of Lord Byron), to a riverbank and some woodland. Whilst more experienced botanists can be more self-directed and independent on a field meeting, said Jonathan, beginners asked the most unnerving questions of the expert, and rather than seeing a plant for the hundredth time, would be looking at it with the freshest eyes (better than my first birdwatching experience in Canada, when I diligently asked what the large black bird was, only to be told ‘a crow’…).

"Also expounded was the notion that ‘everyone looks with different eyes’, something I had not previously appreciated. We learnt that not only will two individuals view a plant differently  (regardless of the plant’s own peculiarities), which can make one key-writer’s description further from your own experience, but that even your own eyes will perceive colour different to each other. As each of us recognises patterns in different ways, bringing our own idiosyncrasies to not just the process of identification, but also to noticing the plants within their habitat in the first place. 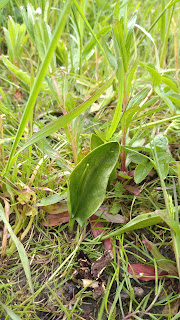 "This was demonstrated most simply when we moved along to a patch of protected conservation area to look for Adder’s-tongue ferns (image on right). Even as a novice, the promise of seeing these in the flesh had been a source of excitement in Jonathan’s preparatory emails. Previously, I’d seen a few of these bizarre-looking green structures popping up on Instagram and Twitter. We waded cautiously into the area that they were known to be, and everyone began crouching very close to the moss and scrub. Suddenly, one of the group had found one – if a little nibbled. It was tiny; I couldn’t believe the shiny, robust looking plant I’d seen given the full focus of multiple photos was this diminutive! And then we couldn’t move for seeing them. As our eyes adjusted to the tone of green we were looking to pick out, an entire ecosystem came into view. Suddenly, one of our group had also discovered a spot-marked orchid rosette. And then, towards the edge of the area, I saw something equally green, but (to my naïve eyes) definitely not an Adder’s-tongue. It took a couple of “Um…Jonathan?”’s for me to work up the voice to get his attention, but I was rewarded by being told I’d found a Common Twayblade (image below left). Luckily this seemed to get everyone excited! Fair to say, when Jonathan later updated us to say this is only the second record of a Common Twayblade in the wider Cambridge City area, my understanding of the plant hunter’s thrill of the chase became well and truly established. 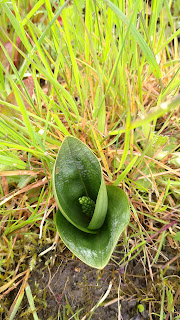 "Heading home at the end of a great day’s introduction to botany in the field, I reflected that my brain felt a little like it’d been subject to a fascinating tour in Japanese or something similar – a little shell-shocked by the amount of information, and the number of new terms, ideas and features that had been shown to exist in locations I thought I knew well. But Jonathan’s care to integrate all the interests of the group, whilst bringing out all that was on offer in the site, made the experience feel far from formulaic or like a classroom. It was fantastic to meet others who had different experiences of engaging in plant identification, and to be able to look to them as a model of what can be learnt through some trial, error and enthusiasm. And, perhaps best of all, how this knowledge can then be passed on to the next new cohort of budding botanists who will ask the hardest questions and see with the freshest eyes".

So, Sarah's first day of field botany left her "a little shell-shocked" but obviously chuffed to bits that she'd notched up only the second record for Cambridge city of a Common Twayblade! Proof that even when you are just starting out in field botany, if you keep your eyes peeled you can make new discoveries and spot plants that even the more experienced botanists had overlooked. My guess is that once she has checked out the resources and ID tips on our orchid ID and fern ID pages, tried all the suggestions on our 'Getting Started' page and looked at the series of Moira O'Donnell's ID sheets on our plant ID for beginners page, those new discoveries will start coming thick and fast - and fingers crossed she'll keep us updated about her botanical progress.