Jim McIntosh, BSBI Scottish Officer, regularly walks the hills and climbs mountains in pursuit of interesting plant records, but he was recently invited to join a particularly interesting expedition.

Over to Jim to tell us more:

"19th August 2021 was the 250th anniversary of the first recorded ascent of Ben Nevis – by botanist James Robertson, who had been commissioned by John Hope, the King’s Botanist and Superintendent of the Botanic Garden, to explore the native plants of Scotland. 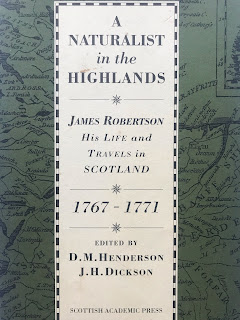 "Robertson’s account of the day given in A Naturalist in the Highlands- James Robertson – his life and travels in Scotland 1767-1771 is very brief, and he doesn’t even record what species he saw except that ‘the plants here are similar to those on Ben Awin and Carngarm..’ (Ben Avon & Cairngorm - for which he provides detailed lists in earlier pages).

"He continues tantalisingly ‘only here, at the west side near the foot I found the M…’ but gives no indication what species ‘M’ is though it must be particularly notable for him not to name it in full! He describes the ‘the third part of the hill towards the top is entirely naked, resembling a heap of stones thrown together confusedly’.

"Fittingly a visit to the summit of Ben Nevis was organised by the Royal Botanic Garden Edinburgh (RBGE) to mark the occasion, and the group included today’s Regius Keeper, Simon Milne, and Director of Science, Prof Peter Hollingsworth, RBGE bryologists and lichenologists, representatives from land-managers the John Muir Trust and Jahama Estates; NatureScot, the Sanger Institute and me!

"The idea was to collect specimens for the exciting new Darwin Tree of Life project which aims to sequence the entire genomes of all (70,000) animals, plants & fungi in Britain & Ireland. And we also collected specimens of Alpine Meadow-grass Poa alpina and Mountain Sorrel Oxyria digyna to lodge in the RBGE Herbarium to mark this special occasion. Click on the links to see BSBI distribution maps for those species.

"We chose to ascend Ben Nevis via the challenging Càrn Mòr Dearg and its famous arête. And, of course, I couldn’t help recording (for Atlas 2040 of course!) as I went along.

"Also, because Càrn Mòr Dearg itself is one of our top ten highest mountains, at 1220 m, I made a full list of all flowering plant species within 10 m vertical of its summit, while everyone else enjoyed a leisurely lunch as the mist and drizzle gradually cleared. I logged 20 species in total, including many arctic-alpines of more acid substrates as befits a granite ridge.

"As we scrambled along the ridge, we noticed occasional patches of Moss Campion Silene acaulis, more commonly seen on base rich soils and crags but somehow also happy here. But a highlight was finding Sibbaldia  Sibbaldia procumbens on the ridge and pretty commonly on late snow line areas on the lower plateau of Ben Nevis.

"This is an important species for RBGE, which was co-founded by Robert Sibbald in 1670 and now has Sibbaldia as its emblem. The Regius Keeper duly knelt and paid homage to the diminutive plant.

"After group photos at the perfectly still summit, and short interviews to camera by Simon and Peter, we began the descent, collecting more bryophytes and looking for some of the most exciting flowering plant species.

"No point in recording here after the comprehensive and thorough North Face Survey involving botanists and climbing guides in 2014-2016, but nice to chance upon Brook Saxifrage Saxifraga rivularis (image below) beside a cairn at the top of one of the gullies.

"Even more exciting was renewing acquaintance with Tufted Saxifrage S. cespitosa nearby – it's one of our rarest and most important arctic-alpines, on Schedule 8 of the Wildlife & Countryside Act (W&CA) 1981 and listed as Endangered on the GB Red List. 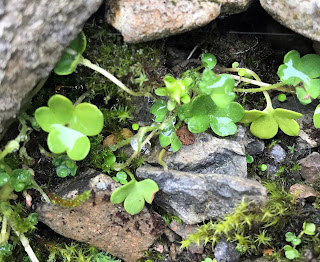 [Ed.: Check out the BSBI Code of Conduct for the full lists of plants on Schedules 8&9 of the W&CA and read more about the GB Red List here.]

"Late in the evening as we descended the main path the sun began to break through wispy clouds, low in the west.

"We eventually returned to the carpark some 12 hours after starting off on the 20km, 1500m ascent expedition tired, hungry but very happy!"

Being a botanist really can take you to the most amazing places.

If Jim's account has left you hungry to read more about botanising on Scottish mountains, check out our 4-part 'Botanical Book at Bedtime' by Peter Llewellyn, all about his plant-hunting adventures in the Cairngorms - part one is here.

We'll leave you with an image taken by Jim of the view from the path on the descent - enjoy! 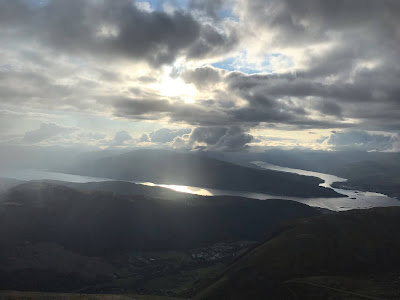