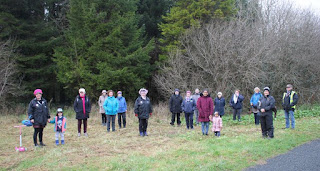 The third day of the 2022 New Year Plant Hunt and the weather is still (generally) being kind to our plant-hunters.

Almost 1000 people have already taken part in Hunts - compared to last year, more of the 825 surveys submitted were carried out by groups, such as the group pictured on the right, who, led by Ciaran Bruton, went hunting in Merlin Woods, Co. Galway (image by Colin Stanley), although we are still not back to the high proportion of group hunts that we used to enjoy in pre-Covid days. 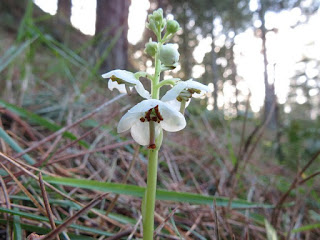 These figures do still need to be verified and our ID experts are already working their way through the data, rejecting anything we can't be 100% sure of, any plants not strictly in flower etc.

But with another day of hunting tomorrow, and some recorders still checking their lists before submitting (the deadline is Sunday 9th January), it's looking very likely that this will be the highest ever total of wild and naturalised plants blooming at New Year. 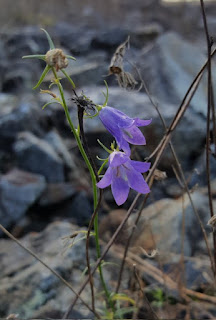 So, with more than 13,000 records submitted so far, what exactly are our hunters finding and are there any themes emerging yet?

There were some very attractive and uncommon finds: Paul Green spotted Round-leaved wintergreen under pines near dunes in Co. Wexford (image above left) and Katherine White saw Harebell in bloom (image on right) in Shropshire; once common across England, Harebell is now classed as Near Threatened on the England Red List.

As in previous years, southern locations and both coastal and urban habitats are proving species-rich, with the longest lists coming from Suffolk, Bath, Cornwall, Jersey... 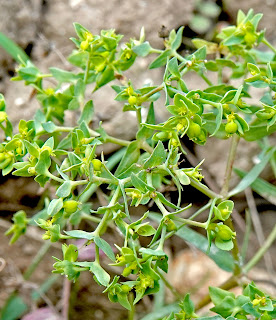 Several journalists have contacted us in recent days asking if any of the New Year Plant Hunt results suggest that spring is coming early, or if they provide evidence of climate change.

Well, spring doesn't seem to be arriving early - while there are a few records of primrose and lesser celandine, and the oddities we've mentioned in recent days, such as Hawthorn blooming in West Dulwich, or Bulbous Buttercup flowering in Dorset, the majority of species recorded seem to be, as in previous years, either all-year-rounders or else the 'autumn stragglers' that have kept on flowering in the absence of hard frosts.

Some of those 'stragglers' are surprising, such as the naturalised Red-hot poker recorded and photographed in Kent by Dave Steere (image below right) - this garden plant is usually associated with late summer. 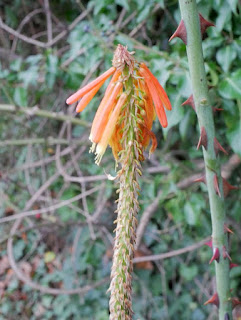 Not all the spring flowering plants blooming early are necessarily welcome. The three-cornered leek recorded and photographed by James Faulconbridge on the Isles of Scilly (image below left) can prove very invasive and outcompete our more traditional spring flowers such as violets and cowslips. Its seeds are attractive to ants who help to disperse the plants. Introduced into cultivation in Britain and Ireland on 1759, it was first recorded "in the wild" in 1849.

These days, it is actually an offence under Schedule 9 of the Wildlife and Countryside Act to plant three-cornered leek, or otherwise cause it to grow, in the wild. The BSBI Code of Conduct, which you can download free of charge here, lists all the plants covered by this legislation.

Narrow-leaved ragwort, recorded and photographed in bloom in Norfolk by Alex Prendergast (image at the foot of this page), does seem to be linked to a changing climate.

Our records show that this plant, which originates from south Africa and was first recorded 'in the wild' in 1836, has been on the increase in recent years and seems to be moving northwards. 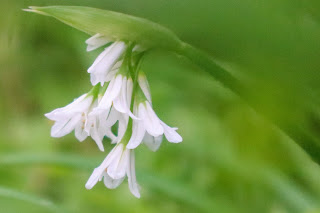 Water bent, which is showing up in multiple lists this year (as it did during last year's New Year Plant Hunt) is another recent arrival which is increasing and spreading northwards.

Our team of volunteers on the Support Desk are sorting through the data and are on the look-out for any other recent arrivals showing signs of increasing, spreading northwards and confounding expectations by managing to bloom in midwinter.

They will be here again tomorrow, waiting to receive and process your records so if you haven't done a Hunt yet - or even if you have - we hope you'll get out there and take part in the final day of this year's Hunt. Then once the data are all in, we'll start the really hard-core analysis. Watch this space! 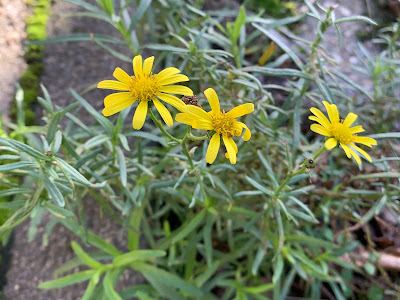