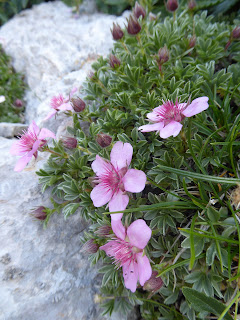 Last time we heard from BSBI President Lynne Farrell, she was out and about in Cumbria and in Wales.

Then in July she headed further afield, to Slovenia.

Here is her report:

"This month I escaped to further afield despite British transport disruptions and joined a trip to the Julian Alps, Slovenia, based in Bohinj near where the International Wild Flower Festival is held in late Spring.  It is an area with magnificent scenery and, of course, fantastic plants.

"I realised that Slovenia has no coastline so the lakes are very popular in summer for recreational water sports and in winter the mountains are ski-resorts (not to mention cyclists for those of you who are Tour de France supporters). 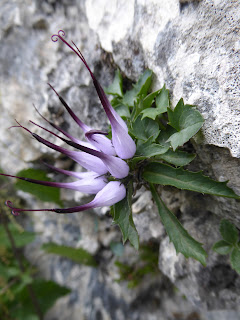 "As the temperature was 30C on most days, dipping into Lake Bohinj helped cool off later in the day. Thunder and lightning occurred late in the evening which lit up the mountains spectacularly.

"Many species of Lily, Saxifrages, Broomrape, Cinquefoil, Bellflower and Thistles are particularly diverse and difficult to determine, but we did manage some including a few species I had hoped to see such as Phyteuma (Physoplexis) comosum, (Devil’s Claw, image on left) and Potentilla nitida (Pink Cinquefoil, image top right), both favourites of alpine plant growers.

"There are a few hazards including Cirsium spinosissimum (The Spiniest Thistle, image below).

"One of the most interesting aspects to me is seeing some of our rare mountain plants growing in abundance with many other species accompanied by species that do not occur in Britain and Ireland, providing a veritable botanical feast."

Many thanks to Lynne for this report and for the gorgeous photos - although That Spiniest Thistle certainly deserves its name! 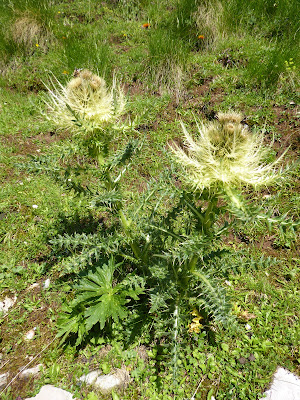