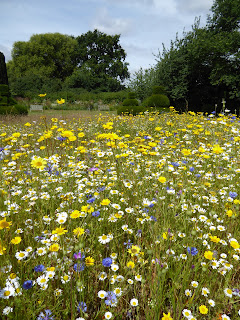 In July, BSBI President Lynne Farrell was in the Julian Alps in Slovenia, but in recent weeks she has been back in the UK - here is Lynne's report for August:

"Now that we have been able to resume normal activities and ‘restore’ ourselves by being out in the wider countryside, I have been to some old haunts and some new ones.

"The old one was where I used to live in Hemingford Grey, Cambs., and I visited the Manor House by the River Ouse. This has a wonderful garden created over many years by Lucy Boston (author of the Greenknowe series of children’s books) and now cared for by her daughter-in-law, Diana, who has become more interested in native plants and is integrating them into the garden as a whole. One of the areas of lawn is now a patch of cornfield species (image on right). 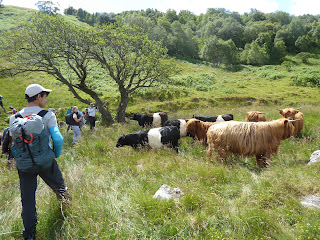 "A new area for me was at Haweswater, Cumbs., where the RSPB are restoring the large site by using grazing by traditional breeds such as Belted Galloways and Highland cattle. Planting of native species grown from seed is also being undertaken and they have a large plant nursery, which needs three hours of watering each day, especially in the hot weather. Students and volunteers are kept busy with this activity and recording.

"The cattle seemed to be as interested in the visiting BSBI botanists (image on right) as we were in recording the plants, but they soon returned their attention to the job of grazing the land. The best find of the day was Adder's-tongue fern Ophioglossum vulgatum, a new site record.

"The site manager, Lee Schofield, has written a book about the whole project entitled Wild Fell: Fighting for Nature on a Lake District Farm. The title itself indicates part of the story.

"I find the mixture of familiar and new a good way to restore myself too".