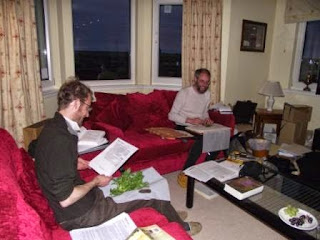 This year's recording has already started on North Uist, with Paul Smith (VC Recorder for the Outer Hebrides and also Chair of Records & Research Committee) and his trusty team of botanists hard at work a little earlier than in previous years.

They have already enjoyed the usual Hebridean mixture of glorious sunshine and horizontal rain -  which, in the Western Isles, often occur on the same day!


Paul said "We've been busy with Taraxacum (following on from the impetus of John Richards' Hampshire Taraxacum weekend, which was great) - the photo on the right shows Oli [Pescott] and me processing the day's catch (which takes significant effort in the evenings). 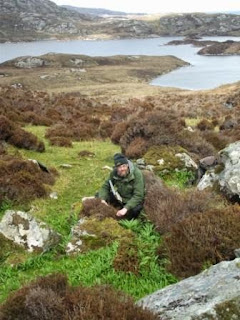 "There are lots of section Erythrosperma on the sand dunes which look rather pretty, as well as some rather chunky species close to habitation. But they're in pretty good condition at this end of the country (although they are all over in Hampshire now).

"We also had a trip to Eaval, the biggest hill on North Uist (but not very big - only 347m), refinding some of the old records for Salix herbacea (on the summit) and Allium ursinum (on the north side below the cliffs). Allium ursinum is uncommon in vc110, and has a funny distribution - this population is an outlier from others in the Uists. But there are still some old records that need refinding for Eaval."

The pic on the left shows Paul on Eaval with Allium ursinum and if you click here you can see its distribution map. Click here to see the map for Salix herbacea.
Posted by Louise Marsh, BSBI at 17:45