Tarspot on sycamore: we need your infected leaves! 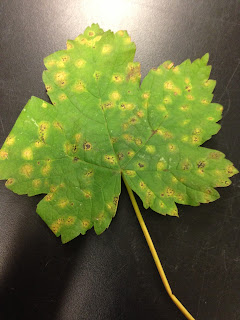 We've had a request from Amanda Clay, a 3rd year student at the University of Derby, who is carrying out research into tarspot fungus and needs our help with sample collection. BSBI members have been very helpful in providing Oli Ellingham with leaves afflicted with powdery mildew so hopefully we can also help Amanda, who says:

"Rhytisma acerinum is a fungus found throughout the globe, most commonly in Europe and North America. It grows in the U.K on sycamore leaves and causes the disease known as tarspot. It is easily identifiable as it presents as very dark, black, tar like spots with a fine yellow rim. Although it does not harm the plant it is unsightly and a high infestation of the fungus can affect the leaves' ability to photosynthesise. 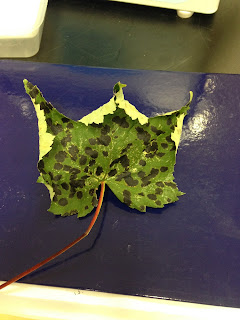 It has long been thought that Rhytisma acerinum has been an indicator of pollution levels. Associations between the fungi and  the annual average concentration of atmospheric sulphur dioxide, which can be estimated by calculating the number of tar spots per unit area of leaf surface, have led to this conclusion (Bevan & Greehalgh,1979).

New theories are beginning to suggest that this may not be the case. When leaves infected with the fungus fall during the Autumn, urban areas clear away the leaf debris, removing the source of inoculum before the following Spring.

Rural areas, especially sheltered ones, have been seen to have higher concentrations of infection, as they leave the fallen leaves on the ground, allowing the fungus to wait in the soil ready to re-infect the trees in the next season (Leith & Fowler, 1988). 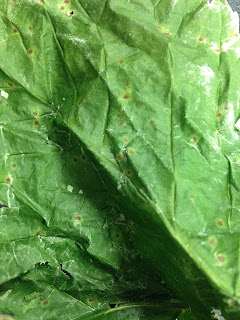 In the U.K there has not been any genetic research done into R.acerinum. All current data on the Genbank website has come from papers written from other countries around the globe, like the U.S and Asia. As such it is not known whether there is a variance in the genetic information found in varying locations throughout the U.K.

A project I am undertaking at the University of Derby is hoping to gather as many samples as possible from around the U.K, and do some molecular work on the fungus. We hope to see if there are any spatial variances in the pathogen, or if there is more than one pathogen causing the same immune response from the host". 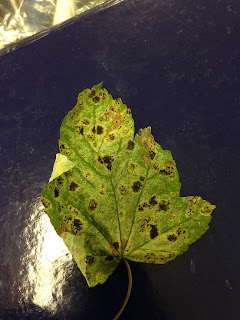 If you come across any leaves showing signs of infestation, please send them to Amanda, attaching the GPS co-ordinates of where the sample was collected. They can be sent in a regular envelope, folded if needed, and sent to: