The BSBI Summer Meeting has now started and organiser Jon Shanklin will be sending us daily reports. Here is his report from Day One:

"Wales welcomed us with its wet side, which rather influenced the afternoon options. A small party did venture out, recording a host of urban species, including Deutzia cf scabra, which was identified using John Poland & Eric Clement's Vegetative Key and later confirmed by John himself as the correct deduction on the basis of its stellate hairs and hollow stem.

"Meanwhile the organiser was logging people in, and noting their changes to recording availability in the second half of the week.

"As David Earl was one of the ones who went out walking, the indoor session turned into a talk by Jonathan Shanklin on Scientific Discovery from the Great War to the Antarctic Ozone Hole.

"The first part featured botany in nearby Llandudno, whilst the second part covered climate change as well as the ozone hole. The botanical section was extended almost at the last minute, with the discovery of a family album of pressed flowers, which record the plants in the neighbourhood of Llandudno between about 1890 and 1905. Even a quick glance at the album has shown that many are earliest records for Wales!

"The Stamford Gate has made us very welcome, quickly observing that we chatted in small groups and so quickly re-arranging the seating in the dining room to tables of four and six.

"After dinner we re-convened, first to have a short briefing on recording and safety in the field (download the BSBI guidance on Safety in the Field from the Field Meetings page), then to hear David Earl on brambles. He had specially focused on Flintshire species and took us through some of the commoner ones, then showed us a new key that he had been developing (note that the key only seems to work if you are using Google Chrome as your browser).

"It required a bit of trial and error for an imaginary specimen, but got us to Rubus armeniacus for a real one, and very quickly took us to Rubus effrenatus, only found in Flintshire on Hope Mountain, which had been sampled the day before. 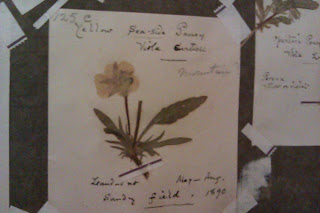 "Tomorrow promises better weather and the chance to explore Gronant dunes and the limestone crags of Graig Fawr.


"The image on the left is of one of the plants in the book - a new hectad record and the earliest date for it in Wales. Note that Viola curtsii is now Viola tricolor subsp. curtsii."

Thanks Jonathan, let's hope the weather improves for all of you tomorrow!
Posted by Louise Marsh, BSBI at 13:20