Earlier this month Irish botanists enjoyed one of the highlights of the year - the #KerryBSBIevent, organised by Rory Hodd of Rough Crew fame.

He asked one of the participants, Jessica Hamilton, to write up a report about the event and here it is, illustrated by Jessica's photographs:

"This day last week, the #KerryBSBIevent was coming to a close. 5 days full of breathtaking scenery, rare and not so rare botanical treats and great company in my home county - the Kingdom! [Ed.: Note for British readers: Jessica is a Kerrywoman, just in case you were wondering!]


"Each day saw participants splitting into smaller groups and tackling separate hectads. Over the five days I found myself at Lough Adoon, Glenteenassig, Inch and scaling Mt. Brandon for two of the five days.

"Every day was so fulfilling in itself and very hard for me to pick a favourite but my favourite outings were probably those up to Mt. Brandon and getting to see an array of rare montane species and hepatic mats.

"Seeing Roseroot in the flesh was a special treat for me and we saw lots on the second day up Mt Brandon, a species like many of the others I had only previously read about or seen in pictures!

"Lots of more common species were also seen up in the mountains with shelves of woodland species like lesser celandine, primrose, dog violet and woodrush still in flower.

"I was also very excited to see the gametophyte of the protected Killarney Fern as it was my first time ever seeing either generation of this special species. The location it was found was also a new elevation record for this species which made it even more special!

"To top it all off, lots of lovely orchids were seen; my favourite however was Listera cordata, (Lesser Twayblade) – Ireland’s smallest Orchid and what an absolute little beauty it is! Thanks for Rory to pointing it out as it really is quite inconspicuous until you get your eye in!

"Thankfully to top it all off, we were blessed with the weather and it was only the last two days when conditions deteriorated.

"One such day was when descending Mt Brandon for the second time when our waterproofs were tested to their absolute limits!

"On the final day, we were also treated to an informative presentation by Marina Reneyn of the Kerry Natterjack toad project followed by a quick trip to see the toads and their breeding pools which was great. Another first for me and they were much smaller then I had imagined, especially the tiny toadlets!


"Overall this was an invaluable and unforgettable experience with so much learnt and many new friendships made; you really can’t beat first-hand knowledge and experience in the field!

"I know I’m speaking on everyone’s behalf when I say thanks to Maria and Rory for organizing such a great event! J ~ Jessica Hamilton"

Many thanks to Jessica for this account and for the fabulous photographs :-)

At this point, it's worth flagging up the results from this event: 45 participants who between them collected more than 5,700 records - a fantastic result and every single one of those recorders deserves our sincere thanks and congratulations!


"A few words from Rory in closing:

"The event was a huge success, with the presence of so many local people very heartening. The fact that so many young and extremely enthusiastic people with a desire to improve their botanical skills came along bodes well for the future of botanical recording in Ireland, and much time was found for teaching and learning each day.

"Over the five days, many sites throughout the magnificent Dingle Peninsula were visited, from the picture-postcard coastline to the precipitous and lushly vegetated mountains.

"Many rare plants were encountered, such as Killarney Fern, Alpine Saw-wort and Alpine Bistort, but what struck most participants was the beauty and abundance of some of the local southwestern and western Irish specialities, particularly the Greater Butterwort, Irish saxifrage and St Patrick's Cabbage, all of which were putting on a beautiful floriferous display.

"Perhaps most importantly of all, lots of fun was had by all and many new friendships were made, to hopefully be renewed at many future BSBI events.


"The records collected during the events will make a huge contribution to recording in Kerry, one of the largest, most topographically complex and botanically rich counties in Ireland.

"Thanks to all participants for coming along and making it the success it was, and particularly to those who led groups, especially Robert Northridge and Clare Heardman. Finally, massive thanks to Maria, who, as always, was supremely organised and efficient and was crucial to the smooth running of the event."

Hear hear! Let's close with a photo of Jessica taken by Clare Heardman, the County Recorder for West Cork - it shows Jessica in her element, up a mountain on a recent Rough Crew outing! 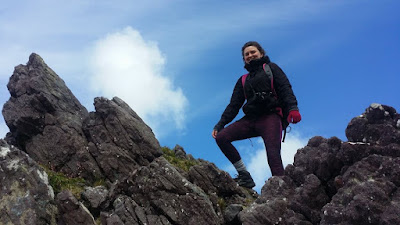