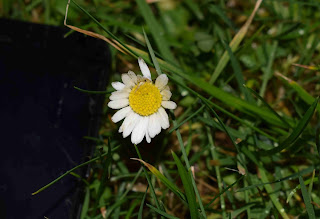 "Two years ago, I had very limited botanical knowledge and wouldn’t have even been able to point out any wildflowers or plants bar the more common species such as a buttercup or the humble daisy. So what got me into botany? 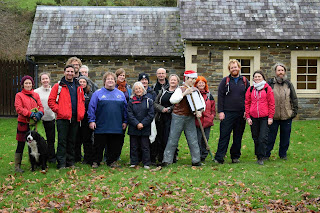 "Two years ago was also when as part of my course (Wildlife Biology ITTralee), we had botany as a module. These included fieldtrips to places like the Burren, National Botanic Gardens and the local Ballyseedy Woods where had a go at keying out spring flowers like Wood Anemone and Wild Garlic.

"As it was one of my first times using any botanical key, I remember flicking back and forth multiple times to the glossary at the back to de-jargonify the key steps so I would have some hope of getting the plant out! From then on my love of botany has continued to grow and to now be co-leader of county Kerry’s local group (BSBI Kerry, photo above) is such a great experience. 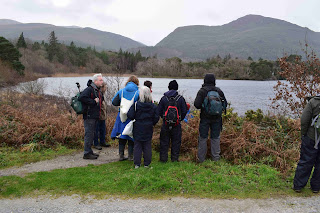 "I want to give a mention to Therese Higgins who was my botany lecturer and is my 4th year project supervisor. She without a doubt helped ignite the botanical flame in me and her never ending passion for the subject is inspiring!

"My appreciation is extended indeed to all staff involved in the course as to see people so passionate about their chosen disciplines, in combination with the small staff to student ratio within the college, further enhances the overall college experience. 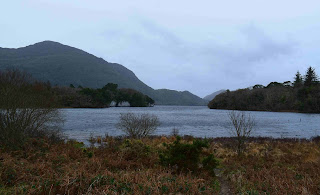 "First off I kicked off my New Year Plant Hunt of 2018 on the 30th December in my home range of Ballyheigue with a quick saunter into the garden at midnight to see what my front garden had for me and I was quickly rewarded with the two old reliables, Daisy Bellis perennis and Groundsel Senecio vulgaris.

"Later that day [Day One] after a few hours kip, it was time for BSBI Kerry to head to Killarney to see what we could find in flower on the Muckross Peninsula in the National Park, led by the botanical force that is Rory Hodd. 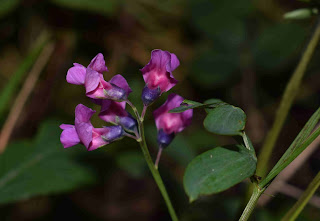 "We covered an area of ground upwards of 7km and recorded a very respectable list of 43 plants in flower including species that we were expecting (e.g. Ficaria verna), and others, (Lonicera periclymenum) which might not have necessarily been on our radars. Our hunt started around in the grounds of Muckross Carpark followed by a quick dash around the arboretum and then off into the woods taking in the views of Muckross Lake.

"We steadily ticked off species such as Lathyrus linifolius (on right), one of my favourite wildflowers. That said, as Rory pointed out, many species were a lot harder to find in comparison to previous years. 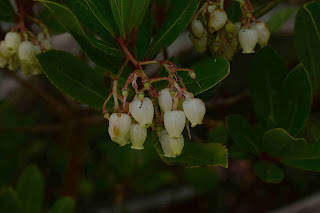 "Two notable examples of this were Rubus fruticose agg. and Arbutus unedo (on left), the latter a particularly a well-known species associated with the Muckross Peninsula and, in previous years, a reliable species to be found with more ease.

"With some searching, both were found in flower, although I think the Bramble flower required a bit of scrambling over the thorny plant by Rory- persistence always pays off!
We sauntered on for another bit and added more species to our list slowly but steadily including species such as Juncus tenuis, an introduced species of rush. 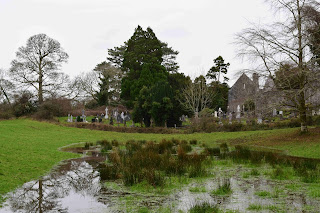 "The clock was paused while we had a quick break for lunch at Muckross Abbey (on right) and added another ten or so species to the list including Alliaria petiolata, and Fragaria vesca.

"As our time for hunting down plants came to close, a few last minute additions such as Cerastium fontanum were ticked off. This was one species we were looking out for intently as until then, the specimens found were about to open, but not enough to be counted. 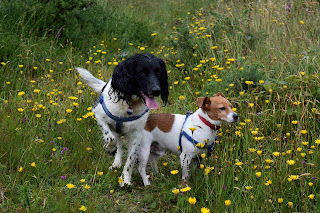 "On Day Two, I stayed in Ballyheigue covered the same areas as I did last year and got a slightly lower number of species this year (19) compared to last year which was around 24 species. As usual I had my two trusty canine companions Lilly and Benny by my side, they’ve now perfected the “Mum has stopped to look at another plant” stance (on left).

"At first, the weather looked promising and the brief period of sunshine gave rise to me ticking the dainty Anagallis arvensis off the list. Into the nearby graveyard and I crossed off species such as Sticky mouse ear, F.verna, and a barely there fumitory along with more common species such as Dandelions, prickly sow thistles and Chickweed. 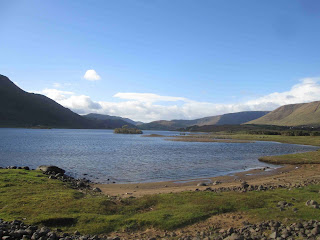 "Then we headed to the Beach (on right) and had a quick walk around the dunes hoping to find Kidney Vetch like I did last year but no joy. I did however find the Rayless Ragwort which dominates areas of the dunes come late summer.

"To conclude our walk and as daylight faded, myself and the pups took in the views of Ballyheigue Beach, a view I never get tired of.

My Three Botanical Wishes for 2018:

1. As others have previously expressed for their first wish, I would like to express my uttermost gratitude for the general nature and community spirit within the BSBI. Every person I have met has welcomed me with open arms and has happily answered any questions for me. 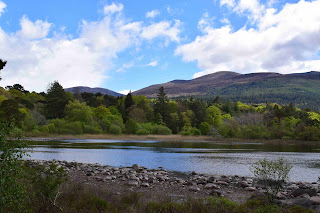 Only a little over a year ago I went on my first ever BSBI outing to search for the rare and protected Lycopodiella inundata (Marsh Clubmoss) at Lough Mask Co.Mayo (on left) and I first became acquainted with Maria Long (BSBI Irish Officer) and Rory, both of whom I would like to give an extra nod of thanks to as they have both been a wealth of knowledge, from both a botanical point of view and getting BSBI Kerry up and running, so thank you! J 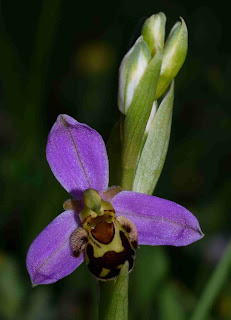 2. With the evolution of the BSBI Kerry group, I am really looking forward to seeing the group grow from strength to strength. When you first dip your hand into botany all the Latin names and terminology can be quite overwhelming but the best way to start off is, getting out into the field and sitting on the side of the ditch or wherever said plant is and practice keying and making mistakes. Once you’ve gone to the effort getting the correct ID, it’s very unlikely you’ll forget it.

So if as a group, BSBI Kerry can ignite a few flames and people come away with a few more plant names to their repertoire then I’d call that a success. Last year we visited Killarney National Park, Blennerville and Glanageenty for our first three outings.

"There are some nice outings in the pipeline for this year so I cannot wait for the 2018 season and I hope the group continues to grow. 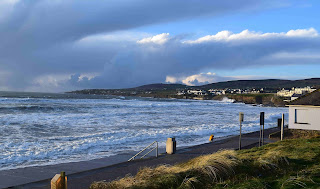 3. The third wish was an interesting one for me to ponder over. I live in the coastal village of Ballyheigue (on left) and it is here where I really got to improve my botanical skills while rambling with my canine companions. I would love it if I could spark a love of wildflowers within my own local community.

"Our most well-known feature is our fantastic beach so if people took a few moments to notice the flowers and plants that they walk by or over, it would be great.

"Another one of my passions is photography, particular nature/plants and invertebrates and I’m currently working on my new website where I can display the hundreds of images of the various species over the past few years. [LM: all the images on this page are by Jessica so you can see how good a photographer she is!] 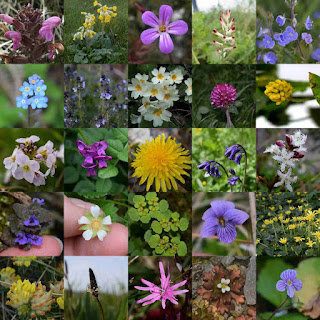 "It’s going to be more of a collection and online “recording notebook” in a sense for myself but if a few people see it and want to then go out and search for biodiversity, it will be worth all the finicky editing that’s currently underway. So I look forward to completing that over the coming months and adding new species to it as I see them. Thanks, Jessica".

LM: It's typical of Jessica that she's interpreted 'what are your three wishes?' not as 'here's what I want for myself' but as thanking people who've helped her and wishing that other people could enjoy botany as much as she does herself!

We'll be keeping you posted on Jessica's botanical adventures this year and will share the link to her new website as soon as it goes live. Many thanks to Jessica for all she is doing to promote botany in Ireland, and to Maria, Therese and Rory for supporting and encouraging her!
Posted by Louise Marsh, BSBI at 23:56