Last month, the long-awaited Field Key to Winter Twigs was published by BSBI. It's already generating lots of discussion on social media and in botany groups across the country. In fact it's been the subject of discussion all year, as botanists across Britain and Ireland helped author John Poland by trialling draft versions of the Key - for example at the 2018 Recorders' Conference.

I caught up with John to ask him a few questions about this new book which promises to be as ground-breaking as the Vegetative Key to the British & Irish Flora, co-authored by John and Eric Clement and published in 2009.

LM: So John, the Field Key to Winter Twigs is here at last - when did you start working on it and what was the impetus for doing so?

JP: It was Christmas 2011. Whilst doing a bit of winter botany, I found a small tree growing, mixed with Goat Willow Salix caprea at the edge of a saltmarsh, that I could not identify. It looked familiar yet I couldn’t work it out using existing guides. Very frustrating! I started seriously on the book in the autumn of 2012. It was only last winter that I went back to see what that mystery tree was – it was just an Apple Malus domestica/pumila!

LM: So that's how it all started, with one tree that puzzled you! There are a few other winter twig books on the market - there's an FSC guide published in 2000 which covers 70 species, another one by Dominic Price & Leif Bersweden published in 2013 which covers 36 species, there's Bernd Schulz's book published earlier this year... what's different about your Field Key?

JP: You can’t have enough books! The FSC guide by May & Panter was the standard ID resource for the last 18 years (most will not be familiar with the similar British Trees in Winter by F.K Makins which was first published in 1945). The second book by Price and Bersweden included photos (hurrah!) but they weren’t able to include many species due to time constraints (I know the problem!).


Bernd Schulz’s book has actually been around for 20 years – in German! It is a work of art and very comprehensive but the descriptions often lack the technical detail to help clinch the ID, so one is reliant on the drawings. He obviously knows the characters and is immensely knowledgeable. As I say in the introduction, it is a useful complement to our key.

Anyway, back to your question. I’ve tried to create a light and portable yet comprehensive guide at a bargain price so users can either take it out into the field or use it at home/ in the lab. It includes over 400 species so everything you are likely to encounter in the wild, parks, gardens, streets etc. I prefer polychotomous indented keys as they show all options laid out, so users can ID specimens quickly, especially when fully illustrated.

LM: So your book is great value - light and portable, covers more than 400 taxa and you won't pay more than £20 for it, even if you missed out on the great value pre-publication offer! Can you tell us about the illustrations? 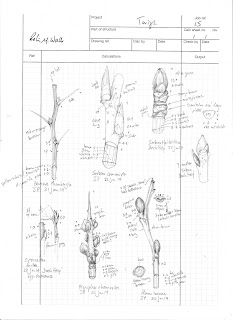 JP: Hopefully, the art speaks for itself! Robin Walls did the fantastic drawings ( there's an example on the left) and patiently (or at least politely) put up with my comments/ requests for re-drawing of certain characters, despite being busy with other botanical work. I met Kevin Widdowson at the BSBI Annual Exhibition Meeting (AEM) in London in 2015 when he had a twig exhibit, and he kindly offered to help with photos. I can neither draw nor take decent photos but these elements are very helpful when it comes to a book like this.

LM: Ooh, I invited Kevin to exhibit at the 2015 AEM! That's what I love about our annual get-together, botanists from all over Britain and Ireland get to to meet each other in person and all sorts of plans are hatched and there are some unexpected outcomes - like Kevin providing the photos for the Twig Key! I see that the glossary has some new terms for us to learn to recognise - stipule scars, bundle scars, marcescent leaves, diaphragmed pith... any tips for us as we get to grips with these strange new terms?

JP: That’s the fun part. Firstly, read the introduction! Everyone normally skips this but I’d say it’s fairly essential reading in this case. It’s easy when you get into it. Try the Key on a few species you know and go from there.

Incidentally, I found a second-hand North American wilderness survival guide and it had a whole chapter on winter twig ID using these same terms so they are used by non-botanists too (so no excuses)!

LM: Sounds like we'll soon be as familiar with these terms as we are with hydathodes, which none of us knew much about until you published your ground-breaking Vegetative Key to the British & IrishFlora!

JP: I hope so. It’s a fun thing to do in winter and those distinctive characters give you certainty of the identification. Street-wise county Floras now include street trees as well as pavement weeds. Even if you’re a purist botanist, many non-native planted trees can be self-seeding so fair game for both recorders and listers alike!

LM: Sounds like the Field Key to Winter Twigs is the ideal Christmas present for the botanist who has (almost) everything!

JP: Absolutely! We all love trees and I can’t think of a better present for anyone who likes to identify what they see. Well, I’ve rambled on enough but I’ve enjoyed doing this interview. I hope you and all your blog readers have a Merry Christmas and don’t forget to identify the occasional winter twig when you're out on the New Year Plant Hunt!

Many thanks to John for telling us more about the new Field Key to Winter Twigs - let us know if you are using the Key and what you think of it!
Posted by Louise Marsh, BSBI at 23:59