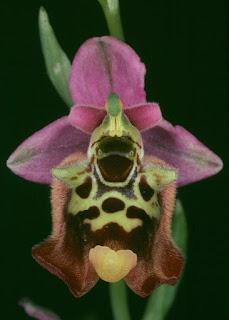 A little Christmas treat for you: lie back and enter a world of passion and deception, as orchid expert Prof Richard Bateman takes over the BSBI News & Views blog to ponder the enduring appeal of bee orchids that achieve pollination through sexual deceit. All images are courtesy of Prof Bateman.


You've recently been peppering the scientific literature with articles about bee orchids; what's so special about them?

Well, orchids always attract a lot of attention, but you'd be hard-pressed to find a more charismatic group of orchids than the bee orchids (Ophrys). They look bizarre, but once you learn more about their biology in general and their reproductive biology in particular you realise just how bizarre they really are. And they're widespread across Europe – it's impossible to take a spring holiday in the Mediterranean without bumping into at least one kind of bee orchid on your travels.

"Reproductive biology"? You mean plant sex? How can that possibly be exciting?

The way that bee orchids are pollinated is so extraordinary that even Charles Darwin reputedly refused to believe it! Male solitary bees emerge in the spring and immediately start looking for a suitable female with a view to starting a family. But the females emerge later than the males, so all a promptly arriving male can find to cool his ardour is a flower with one petal – the lip – that resembles his true paramour. So he attempts to mate with the lip instead.

So that's what you meant by 'sex between kingdoms'? But even male bees can't be that stupid? 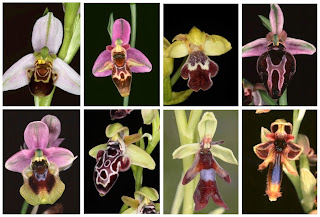 You have to understand the effort that evolution has invested in making the orchid sufficiently attractive to the bee. Perhaps most remarkably, the flower exudes a cocktail of chemicals closely resembling that emitted by the female insect to attract a mate – chemicals called pheromones that can be detected from a considerable distance. Then the complex patterns and often highly reflective wing-like surfaces of the orchid flower act as a beacon, encouraging the insect to home in on the lip. And once the bee has landed, the diverse surface textures of the lip persuade the naïve male that it is indeed gripping its one true love. During the resulting sexual frenzy the orchid glues pollen masses firmly onto the bee (while on some occasions the bee retaliates by ejecting sperm onto the lip!).

And that's how the orchid is fertilised and produces vast numbers of seeds? How clever.

Well, no, not that clever, actually. Transferring pollen from one orchid plant to another means that the bee has to be fooled not once but twice. You'll recall the old adage "fool me once, shame on you, fool me twice, shame on me." And it's doubtful that the insect benefits from this X-rated relationship – it is in practice being parasitised by the orchid! Also, the orchid is sufficiently precisely adapted that it attracts very few kinds of insect, so its range of suitors is somewhat limited. Consequently, fewer bee orchid flowers set seed than in almost any other kind of orchid. Producing nectar – or even just pretending to produce nectar – to feed the visiting insect is far more effective. Even for a bee, dinner can trump sex.

Just how faithful is the relationship between a bee orchid and its chosen insect 'mates'? 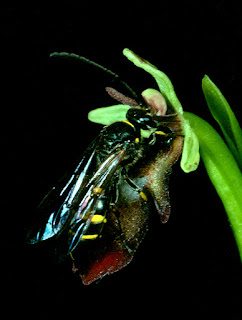 Ah well, this is where the current debates begin. It is certainly true that a bee orchid attracts far fewer kinds of insect than a typical orchid that provides a nectar reward. But in my opinion, some orchid researchers have themselves become so seduced by the elegance of this 'pseudo-copulatory' pollination mechanism that, for them, observing a particular kind of insect visiting a particular kind of bee orchid means that, by definition, they have discovered a new species of bee orchid.

Well, the detailed genetic work pursued in institutes across Europe tells us much about the genealogy of the orchids we study, including who their ancestors were and, to some extent, what kind of life those ancestors experienced. As with human genealogy, we can identify mothers, fathers and more distant relatives, whereas a few visits to the orchid flower from a particular kind of insect represent the most transient kind of scientific observation. Certainly, we've gathered enough genetic information to be confident that 'mistakes' are often made by bees who attempt to mate with two different supposed species of bee orchid and so transport pollen masses between them. Such mis-matings blur the boundaries between the supposed species.

Well, researchers who classify and name species often disagree about the number of species that should be recognised within a particular group. But for bee orchids the arguments have become exceptionally polarised. It is clear that only nine widespread groups are reliably genetically distinct, yet there exist monographs that illustrate more than 350 supposed species of bee orchid, many of which are confined to very small areas of Europe such as single small Mediterranean islands. My colleagues and I believe that current evidence is far too weak to justify viewing these local variants as species.

Well, I guess I see your problem, but isn't this an 'angels on the head of a pin' argument, of no real practical importance?

If only this was a purely intellectual exercise. But if we were to agree that there are at least 350 species of bee orchid it would mean that they represent about half of all orchid species found in Europe and Asia Minor. Combine this over-inflated species number, the rarity of many of those supposed species, and the unparalleled charisma of bee orchids and you inevitably create a massive draw for conservation attention. But if these local variants are indeed not real species, they should not be allowed to draw scarce conservation resources away from other, less charismatic orchids (or indeed, other kinds of plant) – genuine species that are in truth far more deserving of conservation.

So there are ethical considerations as well as scientific ones?

Absolutely. This fact was brought home to me most vividly when studying orchids on a small island in the Aegean. The mayor of one of the towns on the island offered me attractive 'inducements' if I were to state publicly that the bee orchids in his district were species unique to his island! Clearly, he had become aware that orchids in general, and bee orchids in particular, are a significant draw for spring tourism, as orchids attract the same kind of obsessive attention as birds. Box-ticking enthusiasts like many kinds of birds or orchids to be recognised and named by taxonomists so that they have a good excuse for tracking them all down to their lairs.

In that case, why not just give the public what they seem to want?

In my eyes, the extensive variation in appearance and remarkable pollination mechanism of bee orchids are no less interesting if they are viewed as actively evolving, rather than having yielded numerous finished products in the form of genuine, stable species that can readily be 'discovered' and immediately awarded formal names. It would be far better if naming of plants were to be prevented until adequate scientific evidence has first been gathered. I admit that in practice scientific research never achieves its goal of being entirely objective, and I recognise that in recent years pressures – particularly those involving funding – have increased on scientists to 'discover' particular results that were desired from the outset. But even speculations should be rooted in substantial bodies of relevant information, otherwise the entire scientific enterprise would become pointless and we could instead simply adhere to lazy, unsubstantiated beliefs.

My research interest in bee orchids was sparked by a welcome grant from the John Spedan Lewis Foundation, which provided my former student Dion Devey with his doctorate. The more recent NGS-based studies benefitted greatly from the expertise and drive of Gabór Sramkó (University of Debrecen) and Ovidiu Paun (University of Vienna).