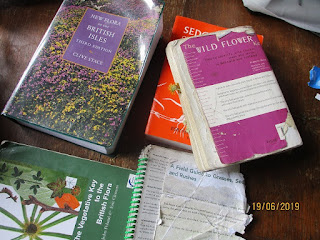 Last month we told you about the Training Grants BSBI offers to botanists wishing to improve their ID skills and we heard from Ciara about the grass ID course she was able to attend, thanks to a BSBI grant. Now Huw tells us how a BSBI grant allowed him to get to grips with difficult higher plants.

"You can find out a lot about a botanist from their bookshelf. Glance at mine (on right) and you'll see a pristine copy of Stace 3rd edition, a nearly new Poland and a horribly well-thumbed copy of Rose, its spine held together by Sellotape. Some sections are more heavily battered. There are dog ears through the index and illustrated glossary of botanical terms, while the daisy pages have earthy marks, and the book falls open naturally on certain pages such as the key to Geraniums or Clovers. 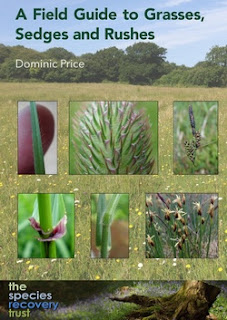 "My botanical journey is probably unexceptional. I have gradually worked away family by family, learning to recognise the commoner species one by one, sorting out their distinguishing features or habits. But then there are the blocks – whole groups of plants, the sight of which leaves me sighing in anticipation of a meandering journey through a key that ends up, well fruitless. The page in Rose with the umbellifers key – that one falls open too, because the spine is pulling apart. How can you hold your head up as a botanist if you hardly do some of the major families?

"I needed help. A big leap forward, a foothold in the umbellifers. A better handle on the composites would be nice too. As for the grasses, sedges and rushes, well my Species Recovery Trust guide to common species (on left) has lost both its covers.

"Fortunately, I was booked on a three day immersive course in Difficult Higher Plants. I didn't know it but as I was travelling by train for a long weekend at the FSC in Preston Montford, botanists Tim Rich and Mark Duffell were out collecting fresh umbellifers, copious composites and packing a large collection of potted sedges into their cars, not to mention various other plants, but more of that later.

"Now of course I have a lot of respect for all published botanists, but... if I can't navigate through a key, that must be the author's fault, right? I mean how hard can it be to write a decent key. One of our first exercises was to do exactly that. We were split into groups with each being given samples of five umbellifers. The rules were that each group had to write a key, each couplet had to mention at least two contrasting characters to split the species, and we needed to use as few steps as possible. None of the five had fruits, and all had white flowers, so we had to concentrate on vegetative characters. Bracts and bracteoles. Stems and leaves, glabrous or hairy. Hairs adpressed or patent hairs. Part of the trick I guess is knowing what all the words mean. And much of the rest is close and careful observation, and knowing what to look for. The keys we wrote were ok, not great, and probably with too many ands, or with too many ors, or with too many ands and too many ors. And we had only had a small fraction of the umbellifers to sort out. We had learned a bit more respect for the authors on our bookshelves.

"Having examined half a dozen vegetative characters that might help you ID an umbellifer, it was time for Tim Rich to introduce a multi-access key (based on a Bradford Botany Group key, by B. Byrne 1989, BSBINews: 52:13-15). It required 5 floral/fruiting characters and 4 vegetative. For instance, umbels with: White flowers, Bracteoles present, Long Fruits, not Winged, and without Hairs. Coupled with plants with: Lowest leaves twice pinnate or ternate, No fibres at stem base, Stems glabrous or with spreading hairs not adpressed, Biennial or Perennial. That gives you a string of nine characters each represented by letters. Looking up the character sequence in a table either takes you to a single species, or in this case to one of three. Hmmm. Well nobody said the umbellifers were going to be easy. Reading on, hollow stem and strongly aromatic gives you Myrrhis odorata (Sweet Cicely). Stem with purple blotches and stem swollen below nodes then splits Chaerophyllum temulum (Rough Chervil) from Anthriscus sylvestris (Cow Parsley). This felt like progress. Life was entering a new phase in which while all Cow Parsleys are Umbellifers, not all Umbellifers are Cow Parsley. 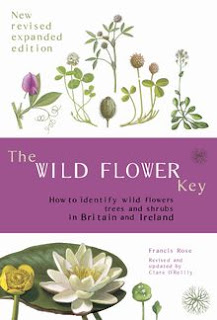 "Next up were the composites. There were 14 of us on the course and we were badly outnumbered by the bunches of freshly picked specimens. This time there was a linear key by Tim Rich – first question – disc florets only, ray florets only or both. The next part was a bit more destructive. Pull the petals off. Are there scales in the receptacle? This is an achene. A what? An achene. Are the hairs feathery? How may rows of involucral bracts? Are they even or irregular? Broken down into steps, it was all manageable. And there were some neat shortcuts. I had never seen the yellow glandular hairs on the involucres of Sonchus arvensis (Perennial Sow thistle) before. It is nice when you only need one character. I just wished it happened more often. And that is one page in Rose (on right) that will be getting a little less wear.

"Being able to compare similar species side-by-side is so helpful and perhaps even more so for the sedges. That said, confronted with four plant pots each containing a different species within the Carex flava agg. group (the yellow sedges), I was still struggling to do more than see they were different.

"There was more. We dabbled with fumitories, dipped into grasses, wrestled with rushes and were absorbed by Sorbus. It was a difficult plant course after all and ultimately that takes you to hybridisation and apomictic species. Tim is an authority on many things including Sorbus (whitebeams)and we were treated to a glimpse of its complexity, as well as anecodotal stories about rare Taraxacum (Dandelion) and Hieracium (Hawkweed) microspecies. I think I'll stick to agg. 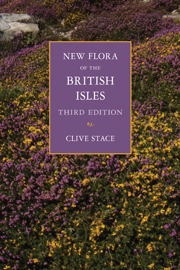 "I left the course with a folder full of keys and a head full of insights. Oh, and an assignment to complete as the course is also a module for the three year part-time MSc in Biological Recording and Environmental Monitoring with Manchester Metropolitan University, based largely around a handful of residential weekends at Preston Montford. We had been shown how to press plants and the assignment asked us to collect 12 specimens from a difficult group, to identify them, press them and write a key. I wanted to do a family I didn't know as studying them would inevitably involve learning them. I had been thinking of the composites or umbellifers but after Tim and Mark's practicals, I had made sufficient progress that I wanted to take on something less familiar. I chose the Polygonaceae and got to grips with Docks and Knotweeds and Bistorts.

"I hugely enjoyed both the assignment and the course and learned huge amounts from both. Thank you Tim and Mark. I was also fortunate that the cost of the course was partly offset by being awarded a £250 BSBI Training Grant, one of a number that are awarded early each calendar year to help students meet the costs of botanical studies. Thank you BSBI. I promise to use my Stace (on left) more often".

Huge thanks to Huw for sharing his story and well done Mark and Tim for running what was obviously an excellent course!
Posted by Louise Marsh, BSBI at 22:33