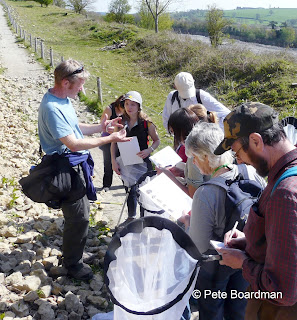 Nominations have opened for the NBN Awards for Wildlife Recording 2019 Developed in 2015 by the National Biodiversity Network Trust, the National Forum for Biological  Recording and the Biological Records Centre, these annual Awards celebrate the individuals, the newcomers and the groups of people or organisations that are making outstanding contributions to Wildlife recording and improving our understanding of the natural world in the UK.

There are five categories of awards:
The five short-listed nominees from each award category will be announced on 1 October and the winners will be announced at a special ceremony on 13 November, as part of the National Biodiversity Network's annual conference in Nottingham.

All too often the painstaking work that individual and groups of Wildlife recorders undertake is not publicly recognised. So let's put that right - nominate your unsung heroes!

Nominating someone couldn’t be simpler, just fill in this short form explaining how your nominee is making an exceptional contribution in the world of UK wildlife recording. You can even nominate yourself! Nominations close on 11 August, so please don’t leave it too late….
Posted by Louise Marsh, BSBI at 23:13