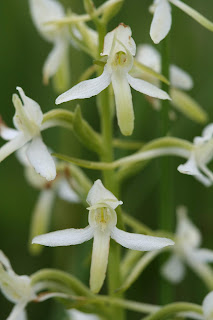 The lovely Lesser Butterfly Orchid is coming into bloom and BSBI and Plantlife are coming together to ask you to record this iconic plant which is in decline across Britain and Ireland. Plantlife has recently appointed a new Project Officer, Mike Waller, to lead on recording and monitoring the Lesser Butterfly Orchid which is classified as Vulnerable on the GB Red List and Endangered on the England Red List. I caught up with Mike to find out what he wants botanists to do – and why it’s so important.

LM: So Mike, you took up your new post in May. Before you tell us about the project and your role, can you tell us a bit about yourself - what were you doing before you joined Plantlife?

MW: Before Plantlife I was a trainee at the Natural History Museum for one year followed by a three-year stint with London Wildlife Trust as one of their Conservation Ecologists. Spending time in the big city taught me a lot about urban ecology the challenges it faces and how wildlife, and particularly plants, are adapting to a rapidly changing environment. Looking further back, I’ve always been a wildlife fanatic but that passion really came into its own when I saw my first bee orchid and ever since then, I’ve been hooked! For the last 18 years I’ve criss-crossed the country in search of our wild orchids; studying them, recording them and photographing them. 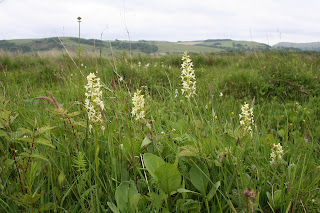 LM: Ok so you really know your orchids! Now can you tell us about Plantlife’s project to collate Lesser Butterfly Orchid records?

MW: The project is all about trying to halt and reverse the decline in the Lesser Butterfly Orchid Platanthera bifolia. It’s a Back from the Brink Project being led by Plantlife alongside a wide range of other projects all designed to save our most threatened species from extinction. This delicate little beauty has seen a 75% decline across the British Isles over the last 50 years, enough to place it firmly in the Red Data List ‘Vulnerable’ category. This means we need to act now to save it from extinction. 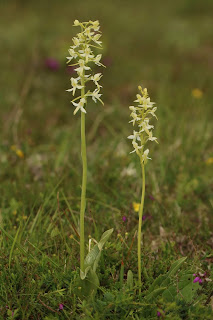 LM: And what exactly is your role in all this?

MW: As the project officer, my role is to entirely immerse myself in the world of the Lesser Butterfly Orchid and pack as much as I can into the next year, whether it be delivering talks, carrying out monitoring or advising landowners - it all helps towards spreading the word.

LM: So what exactly are the orchid hunters being asked to do – and why?

MW: Well a key aspect of the project is to get a better understanding of how the Lesser Butterfly Orchid is doing right now. The best way to do this to urge anyone and everyone to go out and record this species wherever they find it! We want to know how many plants you find, where you find them and what types of habitat you find them in. All of this information provides vital pieces to the puzzle in understanding what exactly is going on. We can then start to formulate what the drivers of the decline might be and what can be done to help.

LM: LBO distribution across Britain and Ireland is a bit uneven – there are many parts of England with lots of botanists on the ground but as this distribution map suggests, the chances of them finding a LBO are slim. On the other hand, there are lots of records from north-west Scotland where there are fewer botanists around to check if the orchids are still there and how they are doing. Short of moving botanists en masse from the English midlands up to the Hebrides – how do you plan to face that challenge? 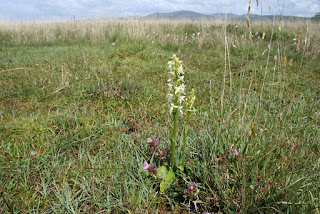 MW: We’re aiming to overcome this hurdle by appealing not just to botanists but to the entire general public. Anyone who likes to take the dog for walk or go for stroll can become a recorder – we just need to get the word out using the combined strength of the BSBI, Plantlife and local media to raise awareness of the Lesser Butterfly Orchid.

This is the essence of citizen science – getting the public to become the scientists and thus massively expanding the potential reach.

MW: This is often one which can confuse people but once you get to know them, it can be fairly easy. In short, it’s all about the two pollen sacks (called pollinia) which sit in the middle of the flower. The Lesser Butterfly orchid has pollinia which are parallel to each other and very close together (almost touching) whereas the Greater Butterfly Orchid has divergent pollinia which are spaced widely apart. Once you become an ace Butterfly Orchid Zen Master, you’ll be able to tell them apart without checking the pollinia because Greater Butterfly is generally a larger-flowered plant with curved tepals whereas the Lesser has smaller daintier flowers with straighter tepals.

People can also download this factsheet  or look at these images And if people have ID’d their orchid by looking at the pollinia but they’d like to double-check, they can take a look at my ‘Beginner’s Vegetative Guide to Orchids of the British Isles’. 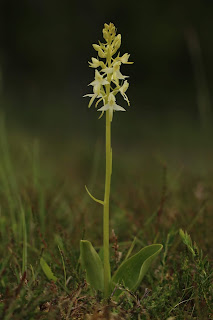 LM: What exactly happens to the LBO records once they’ve been received by you and the Plantlife team? Do they also go into the BSBI database and will they feed into Atlas 2020?

MW: All the Lesser Butterfly Orchid records will find their way to the database as Plantlife has an active and effective data sharing agreement with the BSBI. Anyone who sends in their records will also be contributing to the much-anticipated Atlas 2020 publication.

LM: Some readers may recognise your name from social media where you often tweet about orchids and share some fabulous photos of them! Can you remind people how they can follow you on social media?

MW: If you want to follow me personally on Twitter then search @Leptochila - the scientific species name for the Narrow-lipped helleborine in case anyone wondered!

LM: And if anybody finds a LBO and takes a photo of this gorgeous plant, we’d love them to share it on social media tagging you and @BSBIbotany and including the hashtag #MyLesserButterflyOrchid. I can’t wait to see those photos! 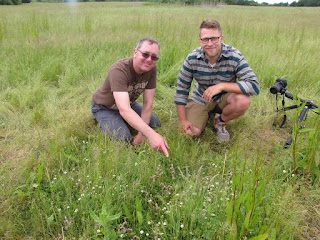 LM: A little bird tells me that you are working on another orchid book – can you tell us something about that please?

MW: Myself and Sean Cole (on left) are currently in the final stages of pulling together a new guide book for Princeton University Press. The idea of this book is to provide the public with the most comprehensive identification guide to our 50+ species. Building on previous fantastic guides developed by the likes of Simon Harrap and Derek Ettlinger, we want help people with the identification of orchids at all stages of development – leaf, bud, flower and seed. Progress has been slow but the finishing line is now in sight. The aim is to have the book published by April 2020.

LM: Mike, thank you so much for talking to us about this project and why we should all get involved. And for providing the great photos on this page!
Any chance that you’ll be able to make it along to this year’s BSBI Exhibition Meeting and offer a poster about the Lesser Butterfly Orchid and how this year’s survey has gone? And there will be lots of orchid lovers present who will be keen to hear more about your forthcoming book!

MW: I’ll definitely be there! Look out for the speccy 6 foot 4 guy lingering around the orchid stalls. It would be great to see you all there in November.

LM: Great, we’ll look forward to seeing you then – and meanwhile let’s all go out and record as many Lesser Butterfly Orchids as we can find!
Posted by Louise Marsh, BSBI at 23:42