Very sad news that Philip Oswald has just died; he was an active BSBI member for many years, joining the society in 1952, serving as a member of BSBI Publications Committee from 1986 to 2018 and on Council from 2000-2003. He was elected an Honorary Member of the Society in 1999 in recognition of his decades of service.

As a classicist - his first degree, from Cambridge, was in Latin and Ancient Greek - Philip was responsible for writing the Latin descriptions of many new taxa for Watsonia and then New Journal of Botany.

The list of books, articles and papers he authored or edited is long and impressive; it includes no fewer than five BSBI Handbooks; John Ray's Cambridge Catalogue (1660), for which he and co-author Chris Preston were awarded the 2012 Thackray Medal by the Society for the History of Natural History; and Philip and Chris, along with Arthur Chater and Gwynn Ellis, worked together to bring the two final volumes of Sell & Murrell's Flora of Great Britain and Ireland to press after Philip's old friend Peter Sell died in 2013. The image below left shows the 'friends' at the publication launch for the final volume (Philip second right). 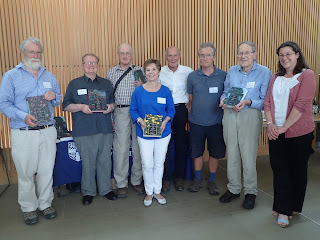 A full obituary will be published in due course by Chris Preston, who collaborated with and served alongside Philip for many years, and will be ideally placed to provide an overview of his friend's long and varied career. For now, I'd just like to share a few memories of him from the last decade, when I had the privilege of serving alongside him on BSBI Publications Committee, known to its friends as 'Pubs'.

Philip was extremely knowledgeable on all things botanical, classical and grammatical and seemed to know everyone in the botanical world. I will admit to being a little over-awed by him and other renowned botanists on encountering them at my first-ever 'Pubs' meeting in 2011 but he sensed my nervousness and quickly put me at ease. 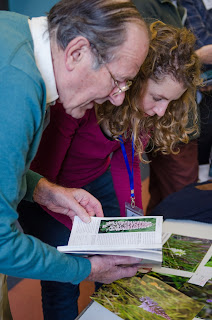 He had a wealth of stories about his botanical expeditions, in fact he and I once 'got lost' en route between the Linnean Society, where Pubs used to meet, and the nearby pub which we used to visit afterwards - Philip was telling me about one of his visits to Mount Athos and the story was so engrossing, we both completely lost track of where we were going!

For a member of the 'old guard', Philip was always very open-minded and encouraging of new ideas around outreach: he often featured in and contributed to this blog, of which he was also a regular reader. He participated in activities such as the New Year Plant Hunt and his review of wildflower ID keys, aimed at beginner botanists, is one of the most popular downloads from the BSBI website (you can find it on our Get Involved page). The image on the right shows him chatting to an early career botanist at the 2015 BSBI Exhibition Meeting.

Final (slightly blurry) photo below of Philip (centre) as many of us will remember him: arriving at the opening of the BSBI Exhibition Meeting 2016, held at the UK Centre for Ecology & Hydrology - smiling, keen to enjoy the talks and exhibits and looking forward to catching up with old friends and finding out what plants they had seen and what they thought about the botanical issues of the day. He will be greatly missed by his many friends in the BSBI and our deepest condolences go to his family. 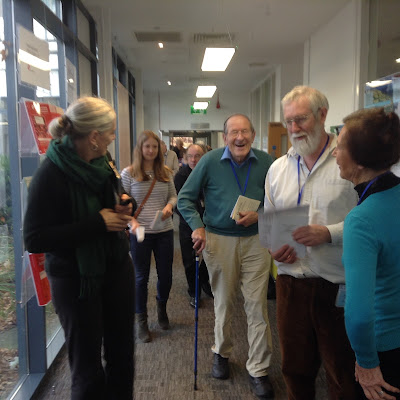