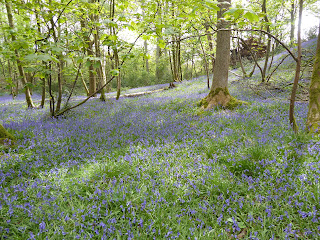 So, what has she been up to since then?

"I have to start this note with the emblem of BSBI, our native Bluebell Hyacinthoides non-scripta as the flower show has been spectacular over the past few weeks. It is difficult to obtain the right shade of blue in a photograph and convey the lovely scent which wafts across on the breeze when walking through a blue woodland. 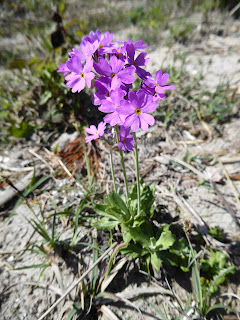 "Here, on one of the Cumbria Wildlife Trust nature reserves (image above right), there has been extensive storm damage with many mature Oak trees flattened and branches torn off. Many of these fallen giants have been left deliberately as long as they are not a danger to visitors, and the gaps that have been created in the woodland will allow many of the young Oak saplings to grow and replace their parents.

"It reminded me of being in a tropical jungle where a fallen giant creates the light and space for other species to take advantage.

"A quick reminder here that if you are looking at a Bluebell and you aren't sure if it's a native bluebell or a garden hybrid, there are some helpful links and illustrations on this page. 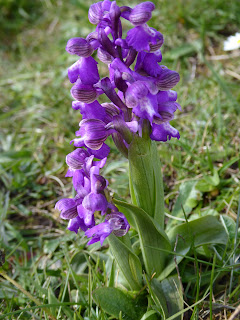 "At Gait Barrows NNR in Lancashire, clearing to benefit another species, Bird’s-eye Primrose Primula farinosa (image above left) has taken place over the past few years. Creating bare patches in the marl around Little Haweswater with subsequent cattle grazing, has provided the right habitat for this small and beautiful plant to thrive.

"It seems to be flowering early this spring and there are many small rosettes surrounding the flowering plants, so the future of what was a declining population due to closing up of the sward is now assured.

"Also just into Lancashire, the National Trust carried out their annual count of Early Purple Orchids Orchis mascula and Green-winged Orchids Anacamptis morio (image on right) which grow together in a large field near the coast. Despite it being a wet morning, a record number of flowering plants of both species were recorded.

"It seems to have been a good year up here for early flowering species, not just orchids. I hope that you also have been able to enjoy the colourful shows throughout Britain and Ireland".