Escape to the Orchid Field: Pete's Big Day Out 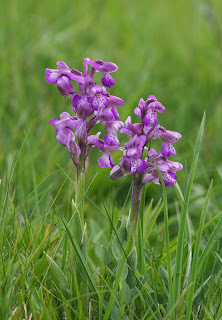 As many regular readers will be aware, BSBI's Science Team (Kevin Walker and Pete Stroh) have been working flat out for the last three years (it probably seems a lot longer to them!) on the third BSBI plant distribution atlas which will contain, summarise and interpret the data collected by thousands of BSBI members and supporters during the twenty years of fieldwork towards the Atlas 2020 project.

For months now, anyone asking Pete what he has been up to recently, has received a glazed look and the muttered response "Atlas captions..."

But it is springtime, when botanists need to get out into the field, even if only for a few hours, so I was delighted to receive the below message from Pete last Friday:

"I escaped the Atlas for the afternoon to survey Terry Wells's Green-winged orchid plot at Upwood Meadows NNR (image at the foot of the page) in Huntingdonshire. I've been doing this each year since 2007. The plot was set up in 1978, and I wrote it up for British & Irish Botany in 2019. 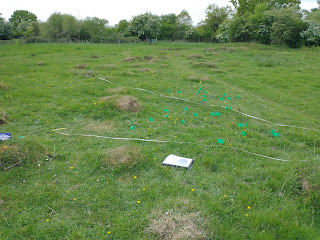 "Anyway, I thought I'd send you some pics, just in case you wanted to mention it on the blog and social media.

"The crucial bit to mention is that the methodology uses two tape measures attached to permanent (feno)markers (image on left). Coordinates are taken for each individual, so that they can be relocated by triangulation each year.

"That means that you can see if a plant has survived, assess flowering performance, know how old it is (at least from 1978), etc. 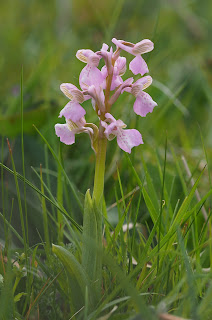 "When I got to the plot, it looked like it was a 'bad year', with very few flowering orchids. However, I found 94 individuals - only four were missing from last year (possibly dead), and there were five new plants. So a net gain of one from last year, which itself was a 'good year'!

"Of the 94, 61 produced flowering stems BUT 46 stems had their heads bitten off by deer and rabbits, so would not have been seen without using this method. 33 were vegetative (so would have also been missed).

"Without using triangulation, I would have counted about 15 orchids, instead of 94! That's a lesson to reinforce for anyone counting orchids (or anything else), I think".

Many thanks to Pete 'Two Tape-Measures' Stroh for this account - he also took all the images on this page during last Friday's brief orchid outing; you can see the distinctive green 'wings' (i.e. the lines on the tepals) very clearly on the pink example above right - click on the image to enlarge it. 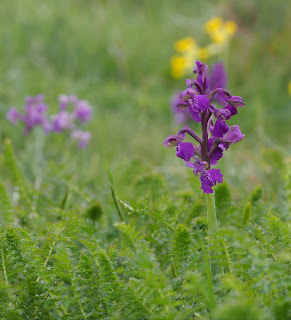 So, we have now sealed up the escape tunnel and Pete is back hard at work editing those Atlas captions.
We hope soon to be able to tell you more about his progress and when we can expect to see the Atlas in print or online, so watch this space!
Meanwhile, if you are planning to get out and enjoy looking at and identifying our native orchids, many of which are at their best right now, you'll want to check out the resources and links we've pulled together for you on our Orchid ID page.
We'll leave you with a pic (below) of Terry Wells's Upwood Meadows plot where Pete's population of Green-Winged Orchids resides safely within the well-managed boundaries of a protected site. 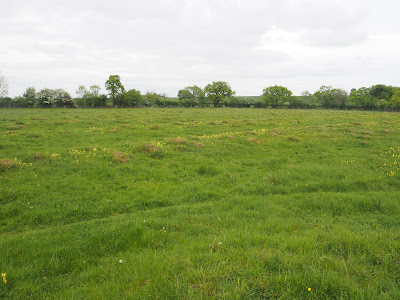