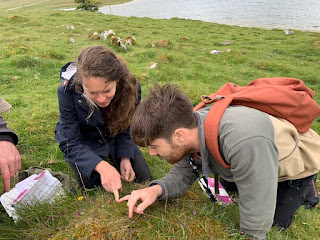 On Thursday, we heard from Jonathan Shanklin, organiser of the 2022 BSBI Annual Summer Meeting; he was wending his way northwards to FSC Malham Tarn, brushing up on his upland plant ID skills en route and getting ready to welcome botanists to the Society's main summer recording event.

Each day, we will be bringing you a report from one of the attendees at the Meeting; here is Laura's report from Friday, Day One:

"On the first day of the Botanical Society of Britain & Ireland's Annual Summer Meeting, there was no time for a leisurely settling-in to our commodious rooms of FSC Malham Tarn Field Centre, with all concerned instead wanting to get right to it with an excursion. The group of over twenty botanists, converging in the western Yorkshire Dales, had travelled from many corners of Great Britain (South Wales, Surrey, Edinburgh, Norfolk, Shropshire, Cambridgeshire, London, Teeside to name a few), some making longer trips of their drive over here to botanise at other locations en route. Conversation was easy, despite this being - for one member at least - the largest group of new people they had met in quite a long time! 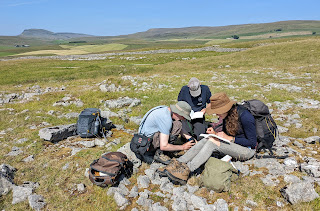 "The botanists split into two for the first excursion, with the groups named “easy” and “rough”, although a warning that the easy group may well walk further than the rough group and would face some tricky botany. The ‘easy, but maybe not-too easy’ group visited Tarn Moss to the west of the Malham Tarn, while the ‘roughish perhaps’ group walked around the east of the Tarn under Great Close Hill, through the Ha Mire and in the Great Close Mire. The rest of this tale will be about the latter group since all this blogger subsequently learnt of the former group was that they discovered Salix pentandra (Bay Willow). 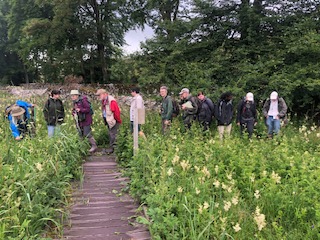 "It has been said in this blog before, and it will be said again, that a problem with Botanical Society meetings can sometimes be the initial chivvying of participants out of the car park. This time I was able to actually get a magnitude to this problem: 35 minutes, or 16.6% of total excursion time was spent recording plants around the fringe and in the front lawn of Malham Tarn house. It was our first monad [a 1km x 1lm square] though, so entirely necessary, and some plants of interest were discovered: Erinus alpinus (Fairy Foxglove) and Cymbalaria pallida (Italian Toadflax) for example, daintily gracing a shady limestone dry-wall, were new species to a number of folks in the group. By this number whether Erinus alpinus looked remotely foxglove-y or indeed Scrophuariaceae-y was questioned. 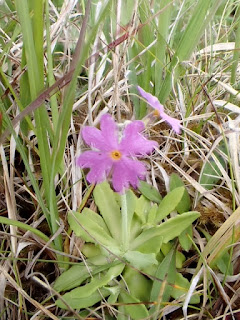 "And so on we progressed, through three successive monads of recording and new habitats and microhabitats yielding fresh collections of interesting specimens. All to the beautiful front drop of Malham Tarn - a large lake by English standards and spectacularly framed by rolling green fells and patches of deciduous woodland - and the dramatic backdrop of Great Close - a limestone cliff complete with Peregrine Falcon. Of botanical note on the lower slopes of Great Close Hill was found Galium sterneri (Limestone Bedstraw) clambering over a little hummock created on a limestone rock, happily growing alongside Galium saxatile (Heath Bedstraw) allowing a minute comparison for those with hand-lens. Mention must also be given to Primula farinosa (Bird’s Eye Primrose, image on left) that was discovered still flowering in the Ha Mire and frequently after that. This species was a new one for some of us and the compact, trim rosettes and creamy white underside of the leaves were admired - this mire would be well worth a visit at the prime of the primrose flowering.

"Finally, I must wrap this tale short since its relation is being squeezed into a spare moment before more excursions, with the exciting plant hunt in the latter part of the excursion. This Annual Meeting, in addition to general monad and tetrad recording, enjoying the sights and botanical company, we’re also trying to help the LORE project - looking for LOst Rarities in England - that is searching for species that have not been found at a site in the 21st Century. For Great Close this meant looking for Bartsia alpina (Alpine Bartsia) and Polygala amarella (Dwarf Milkwort). Great Close Mire was the subject of the search and everyone engaged. Three individuals of a more common Polygala were discovered, raising false hope, but sadly revealed no basal rosette of leaves which is characteristic of P. amarella.

"However, the search for B. alpina was successful! A single stem of this short but stout hemiparasite was discovered, it has already flowered so its purpley-blue flowers could not be admired but the stem nonetheless was highly distinctive and a joy for, in particular, the hemiparasite lovers in the group. A number of us carefully explored the hummocks all around but not a single further stem of this rare plant was discovered. We hope that the seeds currently maturing in the inflated red calices will help to perpetuate this plant into the future".

Many thanks to Laura for this account and to Wendy for images 1,2 and 4 and Julia for image 3. Day Two report to follow - watch this space!