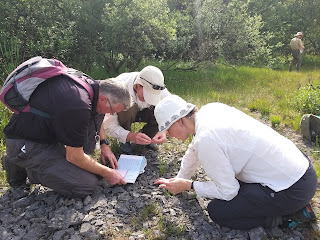 Yesterday we heard from Julia Hanmer, BSBI's Chief Executive, about the day she spent at her first ever BSBI Annual Summer Meeting (ASM).

Today's report is from Than, another plant-lover attending the ASM for the first time.

"This was my first meeting. As a beginner to botany, and having done most of my botanising on the streets of London, the only pavements I knew were those of concrete. The limestone pavements we visited on the Southerscales Nature Reserve were therefore both excitingly new and strangely familiar all at once. 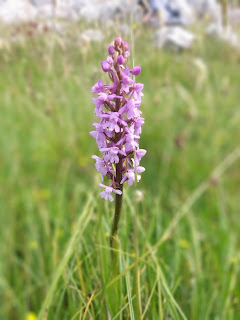 "Here were entirely new plant communities - many of which I had never seen before - jostling together through the cracks and crevices, not unlike their unruly urban cousins who I was better acquainted with.

"On the grazed pastures  surrounding the path up to the main expanse of pavement, we were greeted by a company of orchids. These comprised Coeloglossum viride (Frog orchid), which I thought were less glamorous, but no less dignified than their colourful neighbours, Gymnadenia conopsea (Chalk fragrant-orchid, image on left), and further along, some Neottia ovata (Twayblade orchid).

"The limestone pavements were nothing short of spectacular, building up from patches to a contiguous expanse further up. This was what I could only describe in some parts as a veritable fernucopia (image below right). 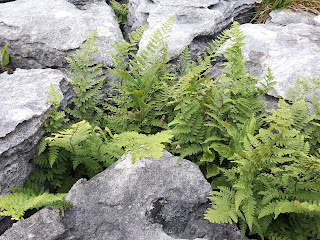 "There were more to follow too, including Athyrium filix-femina (Lady fern), Asplenium trichomanes (Maidenhair spleenwort) and Asplenium viride (Green spleenwort).

"The number of wildflowers on display were also wonderfully plentiful. 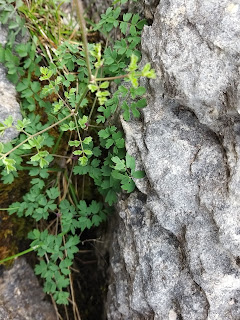 "Whilst I had seen the Thalictrum flavum (Common Meadow-rue) before, this was the first time I saw its dryland cousin, the Thalictrum minus (Lesser Meadow-rue, image on left), and that too, whilst in flower.

"Another member of the Ranunculaceae, which proved a personal highlight was Actaea spicata (Baneberry, image below right). We were lucky enough to see them at different stages of life, with some in flower and others with swelling unripe fruit that were a glossy green for now, but as I was told, would eventually turn a deep and deadly red.

"Amongst many of the learnings, one of the botanists in our party was also kind enough to give me a two minute masterclass on the distinction between the native hawkbits, with the one we had encountered being the hairiest of them all, Leontodon hispidus (Rough hawkbit).

"The afternoon took us to Salt Lake Quarry Nature Reserve. A special find here was the Eleocharis mamillata (Northern spike-rush), a humble plant in many ways, but more notable in my view for its rarity than appearance. "A small plant I was particularly captivated by was perhaps more common, though one I had not seen before - the demure and dainty white flower of Linum catharticum (Fairy flax) - a plant as magical as its common name suggests.

"All in all this was another fantastic day of learning in a fantastic landscape. With so much expertise around, and exceedingly helpful botanists at hand (image below) who were willing to share their wisdom so readily, I feel my botanical knowledge has expanded exponentially in the few short days I have been here.

You're very welcome Than - we're delighted that you enjoyed your first ever Summer Meeting and were able to sharpen your plant ID skills! Many thanks for this write-up and for all the fabulous photos you took, to illustrate this  report.

Only one day left of the Meeting so watch this space for the final report. 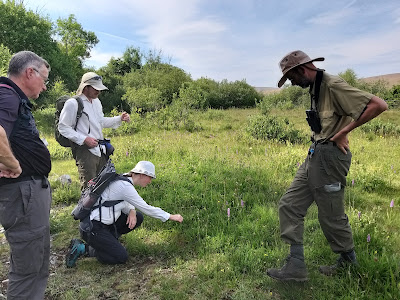